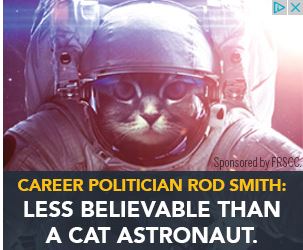 You know the expression "When pigs fly"? Well how about cats in space?

In a Central Florida state Senate district, Republicans are using an astro-kitten to make the case against Rod Smith, a former Democratic senator from Gainesville hoping for a comeback in one of the state's biggest tossups.

"Career politician Rod Smith: Less believable than a cat astronaut," says the ad, which we found on the Miami Herald's website.

It was paid for by the Florida Republican Senatorial Campaign Committee, which backs state Rep. Keith Perry, R-Gainesville.

The race is a near-tossup with blue-leaning Gainesville and the University of Florida, as well as conservative rural Central Florida and Ocala in the district. Both parties have made it a priority.

We may not know who will win on Nov. 8, but we do know one thing: Believable or not, that kitten in a space suit is very cute.

Update: It turns out there has ACTUALLY BEEN A CAT IN SPACE. Her name was Félicette, and she survived the harrowing journey that the French sent her on in October 1963.

This, apparently, was the FRSCC's entire point: A cat in space, they say, is strange but totally real. They've also used the cat in a video ad.