The first day of early voting in Florida coupled with steady returns in vote-by-mail ballots has pushed the total ballots cast to 1.6 million, two weeks before election day. More than 300,000 people voted early on Monday, with county-by-county reports still coming in.

True to form, Republicans are holding a lead in mail ballot returns while Democrats have the advantage in early voting. As of early Tuesday morning, Republicans accounted for 42 percent of returned mail ballots and Democrats 39.7 percent. 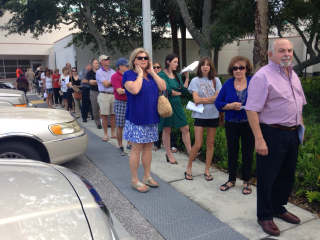 In early voting, a much smaller total number so far, Democrats are doing better than Republicans. Democrats accounted for nearly 45 percent of early voters on Day 1 and Republicans 39 percent (at left, voters wait in line Monday to vote early at a library in Palm Beach Gardens).

Two weeks out, more people have already voted by mail or early in Florida than in any other state. The pace will quicken in the coming days as more people vote early and as early voting gets underway (by Saturday) in all 67 counties. There are also still nearly 2 million mail ballots in circulation that have not yet been returned, and many counties have already begun canvassing or counting mail ballots, which means the laborious process of catching mail ballots with no signatures or mismatched signatures is well underway.