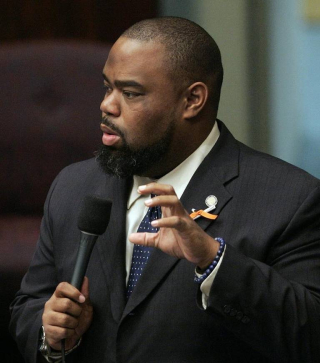 A Florida labor union is spending $45,000 on a new Spanish-language radio ad in Miami so that Florida Democratic Party vice chairwoman and former gubernatorial and congressional candidate Annette Taddeo can promote incumbent state Sen. Dwight Bullard in the final days before Election Day.

Bullard, D-Miami, is in a competitive race for re-election against Miami Republican state Rep. Frank Artiles, who has vastly outspent Bullard in the bitter District 40 contest in central Miami-Dade County.

1199SEIU Florida, which represents 25,000 health care workers, is paying for the ad. The group said in a press release that Taddeo felt compelled to record the ad for Bullard "because of what she described as lies being spread against Bullard’s character in a deceitful Spanish-language ad."

"Artiles is trying smear him with a campaign of lies in an attempt to deceive voters. But it’s not going to to work," Roxey Nelson, political director for 1199SEIU Florida, said in a statement. "Dwight shows up. He is fighting for us, and hundreds of volunteers have been out in force knocking on doors and fighting for him."

In the 60-second radio ad, Taddeo touts Bullard's work as "an educator for twenty years, fighting to raise the minimum wage, to expand Medicaid and enable immigrants to go to college."

Taddeo describes Artiles as "an extremist who voted to take away $1.3 billion from our schools while trying to put guns in our classrooms." She also mentions Artiles' support for Republican presidential nominee Donald Trump.

"Artiles and Trump — the same. That’s why I ask for your vote for Dwight Bullard. He deserves our support for State Senate," Taddeo says in the ad.

Artiles' campaign spokeswoman Sarah Bascom declined to comment on the ad but said Taddeo's "support will have no effect on the outcome of this race."

LISTEN TO THE AD HERE