« Unable to travel to Miami, Obama calls into hip-hop station instead | Main | Governor asks for 'pre-landfall' emergency declaration in anticipation of Matthew's arrival »

In the increasingly mixed up world of party allegiances in Miami-Dade County, the handshake between state Rep. Carlos Trujillo and the Democrat he defeated in 2014 to keep his job, Carlos Pereira, has turned into a bitter three-way feud that is dividing Democrats.

The question: Did Pereira, a candidate for the Doral City Commission and a member of the Miami-Dade Democratic Executive Committee, endorse Trujillo when he accepted $1,000 from Trujillo's political committee in June and posed for a pleasant handshake in front of the Doral City Hall?

Trujillo, one of the Miami delegation's most conservative Republicans, says he did and he posted the photo on his state legislative Facebook page, a symbolic victory over the Democrat he defeated in his 2014 statehouse race.

But endorsing a Republican against a Democrat -- in this case Patricio Moreno of Doral, this year's Democratic offering to defeat Trujillo -- is a violation of the DEC's loyalty oath and a firing offense.

"Under penalty of perjury, I hereby state that I have never endorsed Carlos Trujillo and never did so in writing,'' reads the statement Pereiro signed on Tuesday.

Pereira didn't respond to requests for comment but his campaign manager, Sam Feldman, called the episode "a big misunderstanding."

"Somebody obviously made an error on Carlos Trujillo's web site and posted that Carlos Periero endorsed him,'' Feldman said. "Carlos never endorsed anybody but the DEC has taken on it upon itself to go on a crusade against Carlos.'

While Pereira agreed to sign the letter, he refused their request to call Trujillo a "liar" or to endorse Moreno, Feldman said. He said he didn't know if Pereira asked Trujillo to remove the "endorsement" from the web site. 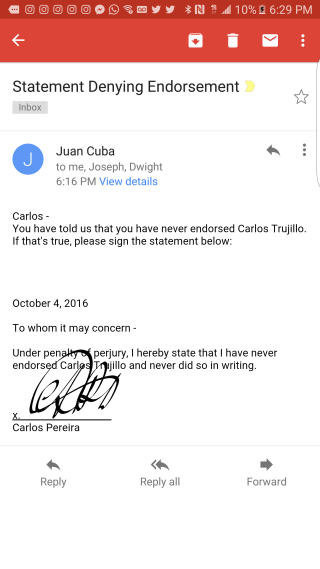 "The bylaws don't require us to endorse Patricio Moreno,'' Feldman explained. "We have some differences with him and, you know, even though Carlos has never admitted to that before, he doesn't want to endorse somebody he doesn't get along with."

Cuba concedes there is no requirement for DEC members to endorse, but he remains unhappy with Trujillo, whom he believes exploited Pereira to try to win over Democrats.

On Wednesday, Cuba sent an email to Trujillo, demanding he "cease and desist" and remove the endorsement claim from his Facebook page or show that he has Pereira's written consent.

Trujillo laughed at the suggestion. "The letter didn't come from Pereira and he (Cuba) isn't a lawyer,'' he said Wednesday. "It makes no sense."

Meanwhile, if Trujillo doesn't take the "endorsement" language down, Cuba said the DEC would file a complaint with the Florida Elections Commission, alleging he is violating the law sanctioning endorsements.

"Someone's not telling the truth here,'' Cuba said. "If it's Trujillo, it's a campaign violation. If not, it's a violation of the loyalty oath."

Trujillo said the whole thing is a misguided attempt to "find a bogeyman" to compensate for the Democratic party's "lack of leadership."

He said the agreement began innocently when, after their 2014 race, he and Pereira "developed a good relationship over the past two years." Pereira invited Trujillo to appear on the his webcast video program to discuss issues and Trujillo "asked him for his help, especially in getting Hispanic Democrats in Doral, and he offered his help,'' Trujillo said.

Trujillo, who then posted the announcement on his web page, calling it an endorsement, said the Democratic colleagues "turned it into a witchhunt" and convened meetings that operated like "kangaroo courts, calling me a liar and bad-mouthing me."

Feldman is also not happy with the way it was handled.

"I think it was a set-up against Carlos,'' he said, referring to his candidate. "They are wasting their valuable time 34 days before the election. It is almost high schoolish."