Clinton: 'We cannot risk putting a climate denier in the White House' 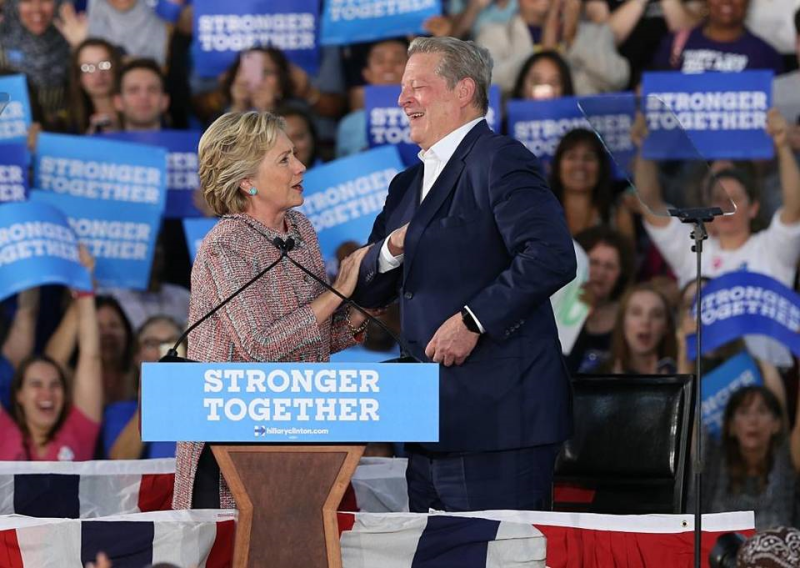 Hillary Clinton brought Al Gore to Miami on Tuesday to underscore her message that she will fight climate change -- unlike Donald Trump, who has said he's “not a big believer.”

“We cannot risk putting a climate denier in the White House,” she declared.

Clinton mentioned increased damage from last week's Hurricane Matthew due to higher sea levels. But it was former Vice President Gore, ever the academic, climate-change science evangelist, who scored the Miami disaster trifecta. He tied global warming to Matthew — “from a tropical storm to a Category 5 hurricane in just 36 hours, that's extremely unusual” — and to the faster spread of the Zika virus.

“Mother Nature is giving us a very clear and powerful message,” he intoned.

What seemed to amuse the crowd most at Miami Dade College's Kendall Campus, however, was Gore's painful recollection of the 2000 presidential election in Florida.

“You won! You won!” people chanted.

Said Gore: “I don't want you to be in a position years from now where you welcome Hillary Clinton and say, ‘actually, you did win....”

By the end of the rally, the supporters in attendance had heard him repeat himself so frequently that they recited in unison: “Every vote counts.”