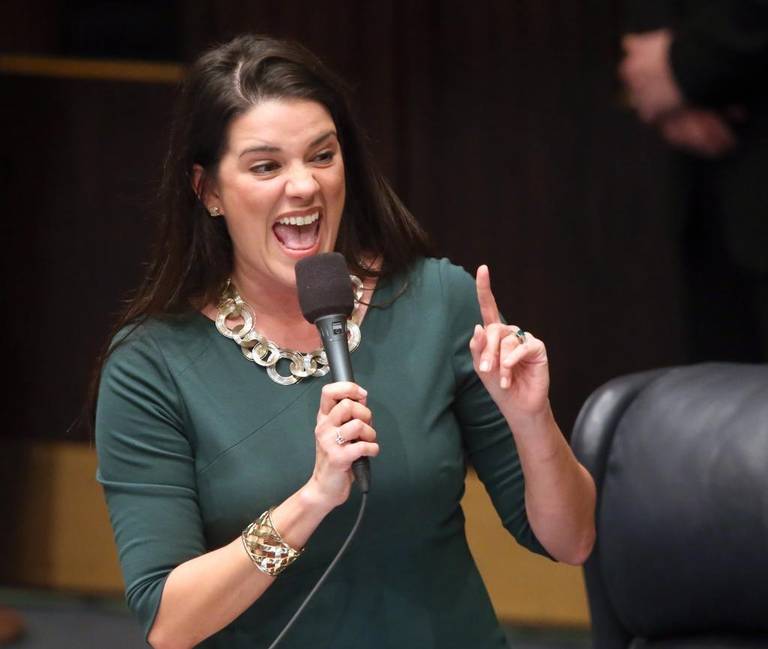 Miami Republican incumbent state Sen. Anitere Flores and her previous employer, Doral College, allege that Flores' opponent has made "untrue and malicious" statements that are "damaging" the college's reputation.

The state party is supporting Democrat and political newcomer Debbie Mucarsel-Powell, of Pinecrest, who's aiming to unseat Flores for Miami-Dade's District 39 Senate seat. The newly redrawn district is heavily Hispanic and leans Democratic.

Doral College in its letter -- which Flores' campaign provided to the Herald/Times -- accused the Democratic Party of repeating two falsehoods: "that Doral College is a for-profit college and the degrees obtained by its students are worthless."

"These claims are objectively false and warrant immediate correction," wrote Ryan Kairalla, the college's general counsel. Here's an example of a direct-mail piece containing the claims Flores and Doral College took issue with.

Kairalla is correct that the Democratic Party erred in referring to Doral College as a "for-profit" college. It is a not-for-profit institution -- although the company that it's associated with is for-profit -- but whether the college's degrees are "worthless" is a matter of continued dispute in the political battle between supporters of charter school programs and those who favor more traditional educational options.

Mucarsel-Powell said Flores' and Doral College's complaints were "yet another desperate attempt by Anitere Flores to distract from her shameful 12-year record in Tallahassee."

Doral College -- and state lawmakers, like Flores, who have worked there -- has been the subject of criticism and scrutiny for several years. The attacks against Flores and Hialeah Republican state Rep. Manny Diaz Jr. (Doral College's current chief operating officer) resurfaced this fall as they both face competive bids for re-election.

Flores worked as president of Doral College from its inception in 2011 until July 2015. She now works as development director for the A.C.E. Foundation, a Florida not-for-profit organization that promotes charter schools.

Doral College is a not-for-profit, private junior college that was partially founded by and is still managed by the for-profit company, Academica -- Florida's largest charter school operator. The college offers tuition-free college courses to high school students, in part, using public funds and charter school teachers. However, it is unaccredited; accreditation is a requirement for dual-enrollment courses in Florida.

Flores said Mucarsel-Powell is spreading a "very clear-cut lie" because "she has no record and no one knows her." (Mucarsel-Powell, who has worked at Florida International University since 2003, is in her first bid for public office.)

"She's just someone quite frankly that's dishonest," Flores said of her opponent.

In the Democrats' mailpiece, the state party likens Doral College to "what Donald Trump did with Trump University" -- a depiction Flores finds offensive.

"It’s very clear what she’s trying to do is claim this is a for-profit college, like others who have shuttered their doors," Flores said. "She’s trying to make it seem like something that it’s not and mislead voters in a way that’s typical of dirty politics."

But Mucarsel-Powell said: "Flores hurt our kids by making money from a non-accredited college while voting more than a dozen times to help for-profit colleges at the expense of public universities like FIU."

"I'm running because I believe legislators should hold special interests accountable, not work for them," Mucarsel-Powell added.

The reference to Trump University is particularly sensitive given the climate of this election cycle where many Miami-Dade Republicans, including Flores, are trying to distance themselves from the Republican presidential nominee. Flores said in May and again in September she hadn't made up her mind whether to support Trump.