Florida's congressional delegation will get a new look post election 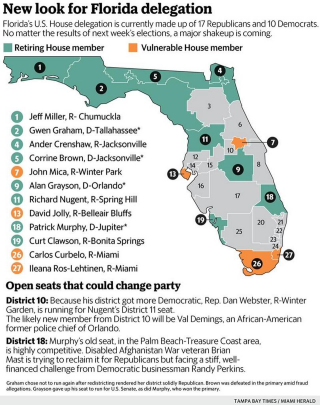 WASHINGTON -- In a career exceeding two decades, U.S. Rep. John Mica has earned considerable clout and can readily list his role in major projects across his Orlando-area district and beyond. This week, Ivanka Trump praised his effort in leasing a vacant federal building near the White House that is now the plush Trump International Hotel.

But the 12-term Republican is in danger of being retired by a political newcomer who embodies the diversity reshaping Orlando and other areas of Florida.

“A lot of being a good political leader comes from having empathy, and given my family’s working-class experience as well as my experience as a working mom, I understand the challenges that come with trying to work hard to provide opportunities for your family,” said Stephanie Murphy, a 38-year-old Democrat who has experience in national security and business and came to the United States as a refugee from Vietnam.

“It’s become very clear to me that people are hungering for a change,” she said.

Even if Murphy does not prevail, significant change is coming to Florida’s representation in Congress. Retirements, redistricting and competitive races will sweep away roughly a third of the 27-member delegation. The turnover — eight members are definitely gone in January — is considered the most in the country.

“Florida could lose a ton of experience,” said David Wasserman, an expert on House elections for the nonpartisan Cook Political Report, which rates the Mica-Murphy race a toss-up.

“On the one hand people should be happy because they want change,” said Darryl Paulson, professor emeritus of government at the University of South Florida in St. Petersburg. “But when you have a system predicated on seniority, often people don’t realize the political implications. They may regret it. You can argue that Florida has not really had the clout it should, but even so, when you lose that many it’s going to be a tremendous hit.”