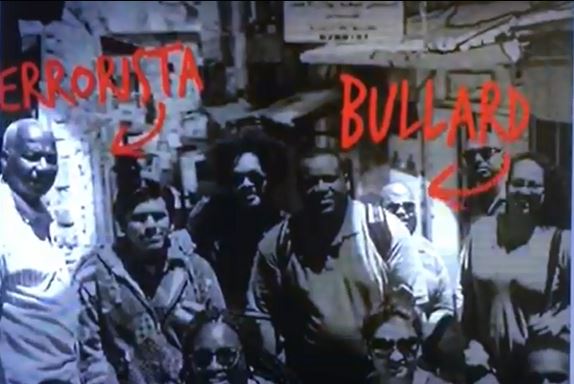 A political committee for Florida Senate Republicans has been running a Spanish-language ad on Miami TV for several weeks now that accuses incumbent state Sen. Dwight Bullard of spending time with a "terrorist" during a trip to the Middle East earlier this year.

The mostly black-and-white ad features footage from the 9/11 terrorist attacks -- specifically, of the second plane erupting into a ball of fire as it strikes the South Tower of the World Trade Center -- as well as news clips from the San Bernardino shooting last year and last month's explosion in Manhattan. It also shows men with cloths over their faces holding guns and waving flags with Arabic script on them.

"If images used in this ad are offensive or extreme, it's probably because meeting with terrorists in the Middle East is both offensive and extreme," said Erin Isaac, a spokeswoman for the Florida Republican Senatorial Campaign Committee, which paid for the ad and is backing Bullard's opponent.

Bullard, D-Cutler Bay, is in a competitive fight for re-election this fall against Miami Republican state Rep. Frank Artiles in District 40 -- a central Miami-Dade County seat that is heavily Hispanic. The FRSCC's ad tries to persuade voters that Bullard has "radical ideas" and "irresponsible conduct" because of his recent trip to Palestine and Israel.

In a recent Herald/Times interview, Bullard dismissed the ad as "a desperation tactic" and called it "a bit far-fetched."

The ad's claims stem from information reported by NBC6 Miami in late August. The station said Bullard, while on a trip to Palestinian areas of Israel, was photographed with "a man linked to a terror group." Bullard told the station the man was a "tour guide in old Jerusalem" and he "had no idea" of his political affiliations.

"Do you know Dwight Bullard?" the FRSCC's ad begins, while showing a 2012 image of Bullard wearing a hoodie covering his head -- something he did as a state representative at the time to show solidarity for Trayvon Martin.

"While the world suffers from terrorism, Dwight Bullard traveled to Palestine and met with an organization listed on the state department's terrorist list," the narrator continues in Spanish. "Members of his own party denounced the trip. We can't remain silent while an elected Florida official meets with a terrorism group. Dwight Bullard: When you get to know his ideas and his conduct, they're more than alarming."

At one point, the ad shows a photo of Bullard's tour group, with a red arrow pointing to him -- "Bullard" -- and one pointing to another man -- labeling him "terrorist."

Asked for his thoughts on the ad, Artiles said in a statement: "As a former U.S. Marine and someone who put on the uniform and served to protect Americans from terror, I am offended that a public official would meet with a terrorist leader and unapologetically challenge Israel’s right to exist."

Bullard had told NBC6 that he is "pro-Israel, but I'm also pro-Palestine in that people can co-exist. ... My position is co-existence."

Bullard told the Herald/Times he's "not going to spend a whole lot of time trying to counter or answer" what he called the ad's "misinformation."

"What we are going to do is make sure people know who we're are, who the campaign is, who I am, what I've been about and highlight some positives," he said.