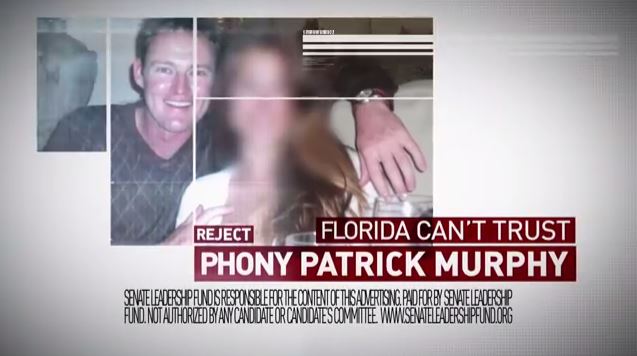 The Senate Leadership Fund debuted the ad Saturday as part of a new $3.2 million ad buy in the final 10 days of the election. The group is spending $11 million in all on TV advertising this fall to tear down Murphy as he challenges Republican incumbent U.S. Sen. Marco Rubio.

In its new ad, the Senate Leadership Fund dubs the two-term Jupiter congressman "Party Boy Patrick" and attacks him for embellishing his academic and professional résumés and for being among the "least effective" members of Congress.

PolitiFact has looked at ads using similar attacks before: on Murphy embellishing his University of Miami degree ("Mostly True"), on him exaggerating his business experience (It's complicated), and on him being an ineffective congressman ("Mostly False").

MORE from PolitiFact: "No, Patrick Murphy, PolitiFact did not debunk every attack against you"

"Marco Rubio and his allies are getting desperate as the polls have tightened and Patrick's campaign has the momentum," Slayen said.

While Murphy was able to narrow Rubio's lead during October, Rubio still holds the advantage in the race and could actually be widening that, according to two new polls released Sunday.

Murphy's campaign has routinely tried to discredit attacks on Murphy's résumé, with Murphy repeating falsely during two recent debates that PolitiFact had debunked "all" of them. That's not the case.

SLF's ad closes with a controversial image of Murphy that Rubio publicized in their first debate: a several years-old image of Murphy appearing to grab the breast of, according to his campaign, a former college girlfriend. Rubio tried to use it against Murphy but it got little traction after Rubio's initial mention of it.