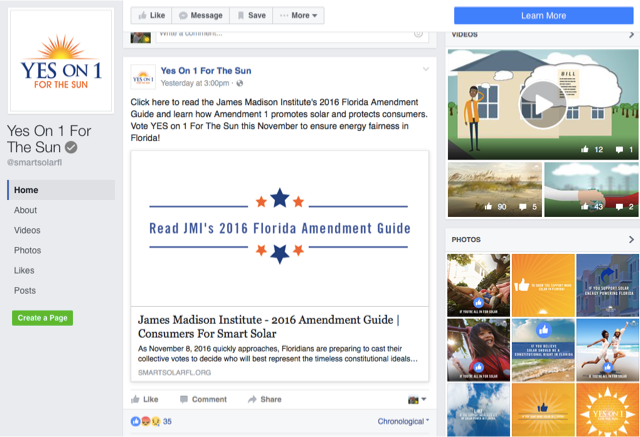 The policy director of a think tank hired by Florida’s largest electric utilities admitted at a conference this month what opponents have claimed for months: The industry attempted to deceive voters into supporting restrictions on the expansion of solar by shrouding Amendment 1 as a pro-solar amendment.

Sal Nuzzo, a vice president at the James Madison Institute in Tallahassee, detailed the strategy used by the state’s largest utilities to create and finance Amendment 1 at the State Energy/Environment Leadership Summit in Nashville on Oct. 2.

Nuzzo called the amendment, which has received more than $21 million in utility industry financing, “an incredibly savvy maneuver” that “would completely negate anything they [pro-solar interests] would try to do either legislatively or constitutionally down the road,”according to an audio recording of the event supplied to the Herald/Times.

He offered others a recommendation: “As you guys look at policy in your state, or constitutional ballot initiatives in your state, remember this: solar polls very well,” he said.

“To the degree that we can use a little bit of political jiu-jitsu and take what they’re kind of pinning us on and use it to our benefit either in policy, in legislation or in constitutional referendums — if that’s the direction you want to take — use the language of promoting solar, and kind of, kind of put in these protections for consumers that choose not to install rooftop.”

The comments underscore the claims made by opponents to Amendment 1 on the November ballot that the utility-backed political committee, Consumers for Smart Solar, was formed to undercut attempts to allow third-party sales of rooftop solar by leaving voters with the impression that their alternative will expand solar generation in Florida. More here.