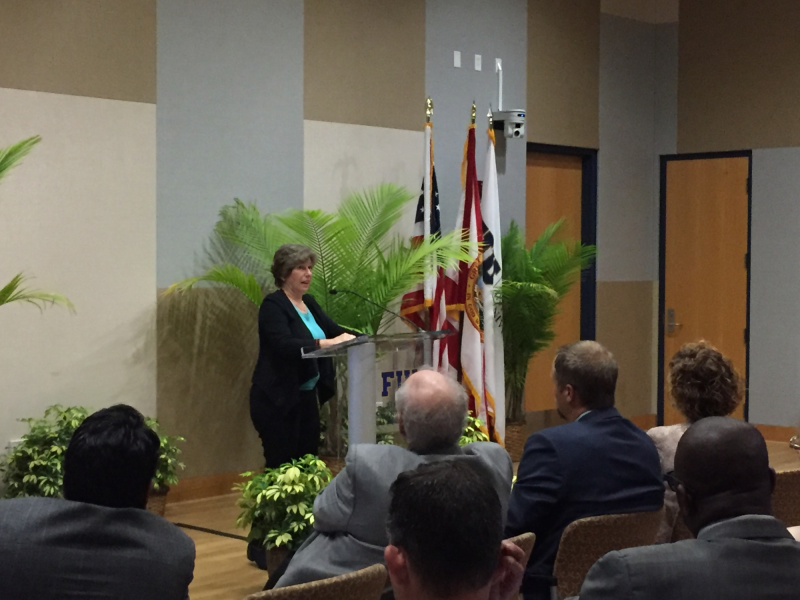 On Monday, the president of a national teachers union had a stark message for aspiring educators at Florida International University: if Donald Trump is elected president, public education as we know it is over.

"He has said through his surrogates that he will decimate public education," said Randi Weingarten, president of the American Federation of Teachers, addressing students from FIU's teacher prep program. "His plan on the federal role would be to take $20 billion dollars out of current existing funds and give it to states so they can do anything with it including giving it to vouchers and charters and whatever with no accountability whatsoever."

Weingarten, who has endorsed Hillary Clinton, criticized the now defunct Trump University, saying that Trump's "template for higher education" amounted to the "exploitation of kids."

Weingarten also addressed the Every Student Succeeds Act (ESSA), a comprehensive education law passed in December that does away with controversial measures in federal education policy like shutting down failing schools. She said the new law marks a shift away from the emphasis on standardized testing that has "sapped the joy of teaching and learning out of both teachers and kids."

With the new flexibility afforded by ESSA, Weingarten said she hopes schools will focus on project-based learning, which she said gives students the opportunity to develop social and critical thinking skills while they learn new material. Weingarten wants to see education in the United States move away from what she described as a focus on testing, competition and austerity toward an emphasis on collaboration, student well-being, engagement and capacity building for staff.

As for charter schools, Weingarten said there's a place for them in the United States if they are "accountable and responsible."

"They can't be a competition outside that's draining resources, they have to be part of a school system," she said.

Weingarten's speech came near the end of a three-day trip to Florida stumping for Clinton in Miami-Dade, Broward County and Tampa, among other places.