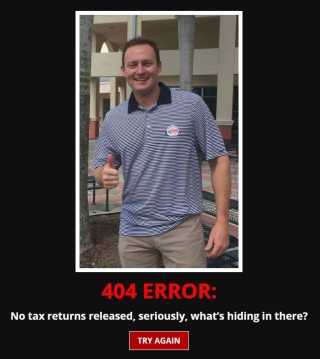 Marco Rubio is doubling down on his call for his Democratic challenger, Patrick Murphy, to release his tax returns, and Rubio's campaign is amplifying that message with a mock website that trolls Murphy's decision to not release them.

Rubio's campaign launched MurphyTaxReturns.com on Monday morning. The site includes a "click here" link to purportedly guide visitors to Murphy's tax returns only to bump them to a series of "error" pages that insinuate Murphy could be hiding any number of things in his tax returns, such as "money made from business with Donald Trump."

The site features prominently a recently unearthed photo from 2007, which shows Murphy's father and the Republican presidential nominee at a groundbreaking for one of Trump's South Florida high-rises. Murphy insists his family's Coastal Construction Group never did direct business with Trump, but Coastal and Trump were both involved in two Trump-branded projects in South Florida.

MORE FROM POLITIFACT: "Patrick Murphy says his family never did business with Donald Trump, but it's more complicated"

Rubio's campaign argues that viewing Murphy's tax returns is now relevant because Murphy recently guaranteed a $1 million personal loan to his cash-strapped campaign, for which Murphy didn't have the cash assets to cover based on his financial disclosure.

Murphy told reporters in Tallahassee on Sunday that he sold stock from Coastal in order to pay for the loan; he had between $1 million and $5 million invested in the company, a "gift" from his father several years ago.

And Murphy again dismissed questions about why he won't release his tax returns, calling it something that "presidential candidates do" even though there's precedent from Florida's 2010 U.S. Senate race, Rubio's first Senate contest.

"Patrick Murphy’s decision to make a $1 million loan to his campaign is all the more reason why Florida voters deserve to see his tax returns," Rubio campaign spokesman Michael Ahrens said in a statement Monday. "Murphy says ‘democracy requires transparency’ and wants to force others to release their tax returns, but his refusal to be transparent with voters begs the question: What is Patrick Murphy hiding?"

Rubio already released summaries of his tax returns this year as part of his previous presidential campaign.

"Marco Rubio’s attempt to distract from his Trump problem with a website is laughable," Slayen said.