« Tampa Rep.: 'There was no fraud' in lawsuit over qualifying papers | Main | Rubio: 'We're not going to be held hostage to whatever Patrick Murphy's mood is' on debates » 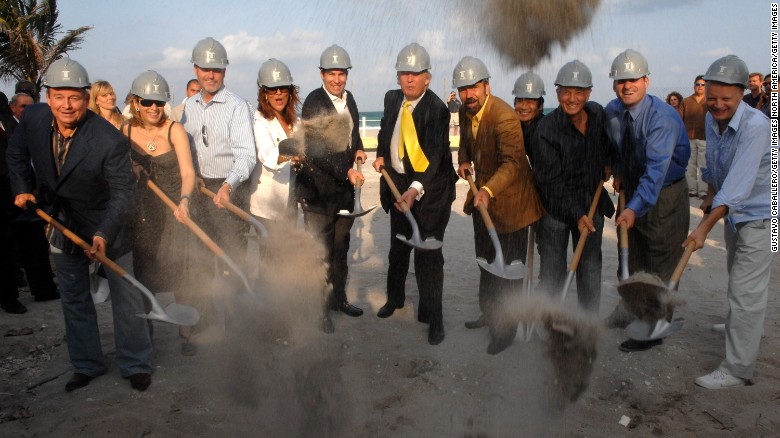 After Patrick Murphy relentlessly criticized U.S. Sen. Marco Rubio for weeks for standing by Republican presidential nominee Donald Trump, Rubio tried to shift the spotlight on to his Democratic challenger during last week's first Senate debate by alleging Murphy's family has made "millions" off doing business with Trump.

Murphy quickly called it "another lie" and, in the days since, has repeatedly denied any direct business connections between Trump and his family’s Coastal Construction Group. "We've never had a contract with Donald Trump," Murphy told the Tampa Bay Times and other Florida news media last week.

But CNN.com on Tuesday unearthed old photos that put Murphy in the position of having to further explain himself.

The images show Murphy’s father -- Coastal founder and CEO Tom Murphy Jr. (shown above at far left) -- a few feet away from Trump in a group photo-op at the ground-breaking for Trump Hollywood in 2007. Everyone in the photo, including the elder Murphy, is wearing a Trump-branded hard-hat.

Republicans quickly blasted out CNN.com's story, saying the images were "damaging" to the Jupiter congressman and "prove Murphy lied in the last debate."

But Murphy's campaign says the images show nothing of the sort and shed no new light on Coastal's business history with Trump.

The campaign acknowledges Coastal and Trump were "associated" with the same two South Florida projects -- Trump Hollywood and Trump Royale in Sunny Isles. But the campaign maintains, as Murphy has also said: It was the developer's responsibility in each project for separately hiring Coastal as its builder and Trump to market the properties.

Nonetheless, expect this topic to come up during Wednesday night's second and final U.S. Senate debate.

Photo credit: In this Getty image from 2007, Tom Murphy Jr. (pictured far left) appears in a group photo with Donald Trump (center) during the ground-breaking for Trump Hollywood. CNN.com