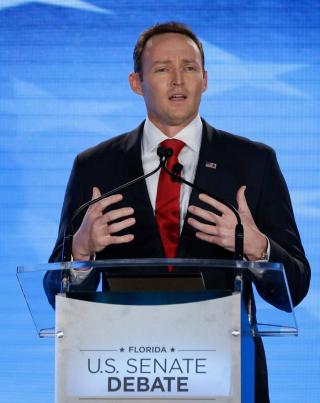 Murphy's campaign announced the loan last week as something that would give the cash-strapped Jupiter congressman additional resources to run TV ads across the state in the final two weeks of his bid to unseat Republican incumbent U.S. Sen. Marco Rubio.

Rubio, however, has questioned how Murphy could have come by such a hefty loan when Murphy doesn't have the cash assets to cover it, based on his most recent congressional financial disclosure.

"It was basically a stock sale, of stock I had," Murphy explained to reporters during a campaign visit to Tallahassee on Sunday.

When asked whether the stock in question was specifically Murphy's investment in Coastal, Murphy said: "Yes."

"We are completely compliant with that [and] have attorneys helping out to make sure it's all compliant," Murphy said.

Murphy's campaign later Sunday did not respond to a follow-up inquiry about to whom Murphy sold his investment. Coastal is a private, family-owned company founded and managed by Murphy's father, Tom Murphy Jr. -- who has spent at least $2.8 million this cycle on Democratic efforts supporting his son's Senate run.

Patrick Murphy's financial disclosure from 2015 shows his net worth was between $72,000 and almost $4.8 million -- much of that coming from stock in Coastal worth between $1 million and $5 million. The investment was a "gift" from Murphy's father in 2012 before Murphy took office.

Murphy has struggled with low statewide name recognition throughout his 19-month campaign, but his prospects against the well-known incumbent improved slightly around mid-October.

Two polls in the past two weeks have shown Murphy and Rubio tied. However, several others still show Rubio with a several percentage-point lead over his challenger; two released Sunday show Rubio with as much as an eight- or nine-point advantage.

"We're just trying to make sure our name ID gets as high as it can be at the end here," Murphy said of his personal loan. "At a certain point you need to be able to get on the airwaves -- radio, TV, that sort of thing -- and I really think this will help in the home stretch."

He added: "I get the sense that people are really trying to tune in, so we just want to make sure we're really covering the airwaves, so people know exactly who I am."

Asked again Sunday why Murphy won't release his tax returns -- something Rubio on Friday officially called on Murphy to do -- Murphy repeated his campaign's previous talking points that "that's what presidential candidates do."

However, in Rubio's first Senate race in 2010, Rubio, Kendrick Meek and Charlie Crist all released their tax returns. Murphy dismissed that precedent as "the first time in 20 years that that happened."

He would not say, when asked by a reporter, what harm could come from the transparency of releasing his tax returns, or even a summary of them as Rubio has done.

"I'm not running for president; that's what Marco Rubio does," Murphy quipped. He also said: "I've always released that personal financial disclosure dating back to 2011, pay a 32 percent tax rate and have for five years, and proud to be very transparent with everything in there. And the truth is, that shows more information than the tax returns."

Nationally, though, the argument for Republican presidential nominee Donald Trump to release his tax returns has been that those documents would reveal more specific details about the candidate's financial situation than provided in federally required financial disclosures. (Murphy co-sponsored legislation in June mandating major-party presidential candidates to release their tax returns.)

During Murphy's campaign visit to Tallahassee on Sunday -- his first since early August -- Murphy attended worship services at several black churches with Mayor Andrew Gillum in the morning, as part of the "Souls to the Polls" effort to encourage early voting. In the afternoon, Murphy and Gillum also stopped by an early voting site in the south-side of Tallahassee to meet with voters, before the pair attended a fundraiser for Murphy in downtown Tallahassee.