Murphy's political cavalry arrives, in the form of President Obama 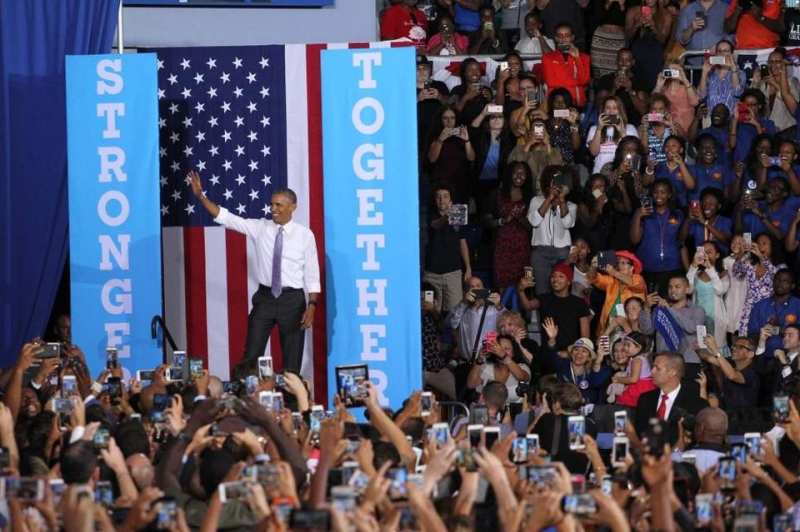 The political cavalry arrived Thursday for Patrick Murphy. His name was Barack Obama.

Obama swaggered into Miami Gardens purportedly for Hillary Clinton, the potential sentinel of his White House legacy. He’s in an unusual position for a sitting president: He’s more popular than his selected successor, who’s more than eager for him to act as her most prominent stand-in, especially to African Americans.

But polls show Clinton leading Donald Trump in Florida, which some political prognosticators have placed in the light blue “lean Democratic” column, no longer a toss-up.

So Obama did what he had to do. He ripped Trump for refusing to say during Wednesday night’s debate if he’ll accept the Nov. 8 election results — and for quipping Thursday in Ohio that he’ll accept the results “if I win.”

“That is not a joking matter,” Obama told the capacity crowd of 2,800 at Florida Memorial University’s athletic arena. “I want everybody to pay attention here — that is dangerous. Because when you try to sow seeds of doubt in people’s minds about the legitimacy of our elections, that undermines our democracy. Then, you are doing the work of our adversaries for them.”

The president also passionately defended Clinton, calling her ready and capable to handle the Oval Office.

“Even in the middle of a crisis, she is calm and cool and collected,” Obama said. “And here is the thing about Hillary: No matter how tough the odds, no matter how much people try to knock her down, no matter how mean folks can be, she doesn’t point fingers. She doesn’t complain. She doesn’t whine. She just works harder. And she gets the job done, and she never, ever, ever quits.”

But then, the president focused on the guy who needs his help most: Murphy, the U.S. Senate candidate who national Democrats have all but abandoned.