Patrick Murphy, who 'hates' super PACs, raises money off 'major boost' he's getting from one

Democrat Patrick Murphy has made campaign finance reform one of his key issues in his bid for U.S. Senate, notably saying this year he "hates" super PACs.

Yet, on Friday morning, Murphy's campaign sent out a fundraising email heralding it as "great news" that the Jupiter congressman was getting a "major boost" from one of those very same political funding sources he wants to dismantle if elected to the Senate.

The email references outside help Murphy's campaign is getting in the home-stretch from the Senate Majority PAC. The national Democratic super PAC announced Thursday it'd be giving at least $1 million to another super PAC dedicated to boosting Murphy's prospects against Republican incumbent Sen. Marco Rubio.

"This is fantastic for our race," Murphy's fundraising email said. 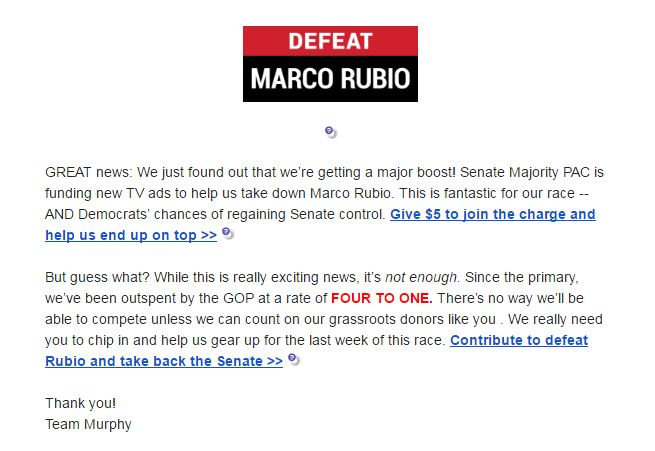 Murphy has said repeatedly that he wants to reverse the Supreme Court's Citizens United ruling that paved the way for super PACs as well as dark-money groups, which don't have to disclose their donors.

Both Murphy and Rubio have benefited greatly from those funding sources during their past and present campaigns.

But of the two, only Murphy champions getting rid of super PACs even as he embraces the benefits of them -- a position that has sparked accusations of hypocrisy from Murphy's critics. (Rubio supports Citizens United.)

For example, despite abhorring special interest money in politics, Murphy has voiced gratitude for his wealthy father pouring nearly $3 million so far this cycle into super PACs -- including the Senate Majority PAC -- that have supported Murphy's Senate campaign.

When asked why Murphy was touting the "major boost" he's getting from the type of political group he wants to get rid of, Murphy's campaign spokeswoman Galia Slayen said in an email to the Herald/Times: "Like every other Senate candidate, Patrick has to play by the rules as they are, not as he wants them to be. To do otherwise would be absurd."

"Patrick has a message of showing up and working hard for Florida and he is appreciative of support that helps get that message out," Slayen said.