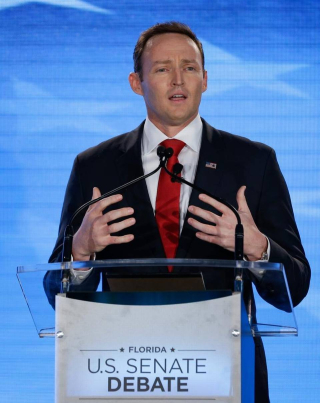 Patrick Murphy's father gave another $1 million to a major Democratic super PAC last month, just 10 days before the group pulled $6 million in planned ads out of Florida as Murphy's campaign struggled to gain ground on Republican incumbent Sen. Marco Rubio in September. (Patrick Murphy is faring better this month, as the race remains a dead-heat but Democrats haven't re-invested the dollars they pulled.)

It was the second $1 million contribution Tom Murphy made to the Senate Majority PAC since this summer -- and it came on the same day in September he also gave another $250,000 to "Floridians for a Strong Middle Class," a super PAC dedicated to supporting Murphy's Senate campaign.

Earlier this year, Murphy's father previously also gave $500,000 -- through himself and Coastal -- to the pro-Murphy super PAC.

Super PACs can raise unlimited funds but are prohibited from coordinating with candidates' campaigns.

Patrick Murphy has come under scrutiny because of his father's generous support. His former primary opponent, U.S. Rep. Alan Grayson, and at least one conservative group have each alleged Tom Murphy's donations constitute illegal coordination between Murphy's campaign and the independent super PACs -- something Murphy's campaign has called a "frivolous and unfounded attack."

Murphy has made campaign finance reform one of his campaign platforms -- saying earlier this year, he "hates" super PACs -- but he hasn't spoken out against his father's six- and seven-figure donations on his behalf. Rather he's expressed gratitude for the support from his father, whom he frequently describes as his "best friend and mentor."

Tom Murphy is the founder, CEO and chairman of Coastal Construction Group, one of the largest construction companies in South Florida. On the campaign trail -- including at a Hillary Clinton rally on Thursday in Miami Gardens -- Murphy often recounts how his father was a union carpenter who never got a college degree and "started his business out of the back of a truck with no guarantee of success." But success Tom Murphy found, turning Coastal into a billion-dollar company that made the family, including Patrick Murphy, millionaires.