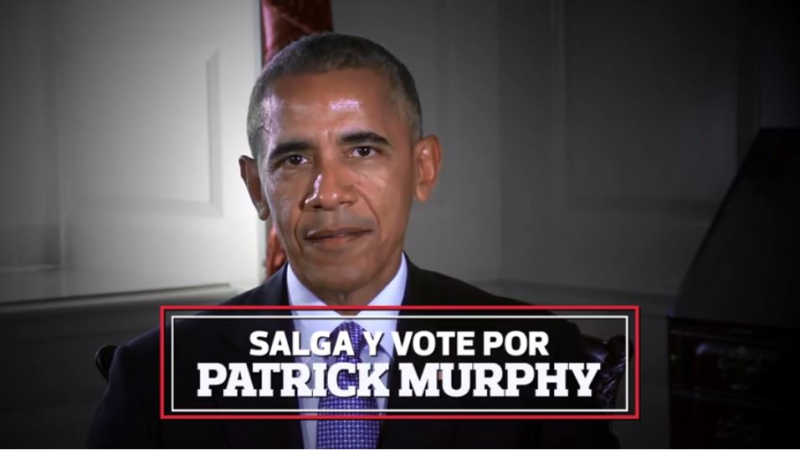 While national Democratic groups are all-but abandoning Patrick Murphy to fend for himself in Florida's U.S. Senate race, the party's figurehead isn't.

President Barack Obama cut another ad for the two-term Jupiter congressman -- this one in Spanish.

"Go out and vote for Patrick. Your vote is very important," he added.

Of the eight general election ads Murphy's campaign has released to date, this is the first one that doesn't also simultaneously attack, or even mention, his opponent: Republican incumbent U.S. Sen. Marco Rubio.

Murphy's campaign said the ad will air in Tampa, Orlando, and Miami as part of an existing million-dollar ad buy.

This is the latest example of Murphy's aggressive and noticeable efforts to improve his appeal among Hispanic voters since late September. Rubio, a Cuban-American who's fluent in Spanish, has polled stronger among that demographic, aside from leading Murphy in every poll for months. (Recent overall polls have shown the two candidates closer, which has narrowed Rubio's average advantage to 4.2 percentage points, according to Real Clear Politics.)

Obama -- and Vice President Joe Biden -- endorsed Murphy in the spring. Obama did both radio and TV ads for Murphy over the summer when he was still in a contested primary against Democratic U.S. Rep. Alan Grayson.