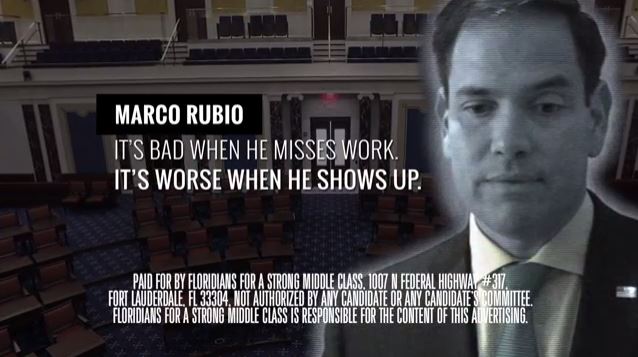 On Thursday, the Senate Majority PAC announced it was giving at least $1 million to "Floridians for a Strong Middle Class" to prop up Murphy's campaign in the final days of the race. "Floridians for a Strong Middle Class" spokeswoman Ashley Walker said the latest ad buy is being funded in part from that money, as well as money from other supporters.

"It’s bad enough that Rubio rarely shows up to work, but it’s worse when he actually does and votes against our state’s best interests," Walker said in a statement.

Rubio spokeswoman Olivia Perez Cubas said in response: "Patrick Murphy has been in Congress for four years and has nothing to show for it, so he and his allies are attacking Marco. Florida already has a senator with a strong record of fighting for them, and that's why they're going to re-elect Marco."

Recent polls show Rubio is maintaining an edge in the race, but Murphy has been able to narrow the gap in the past couple weeks.