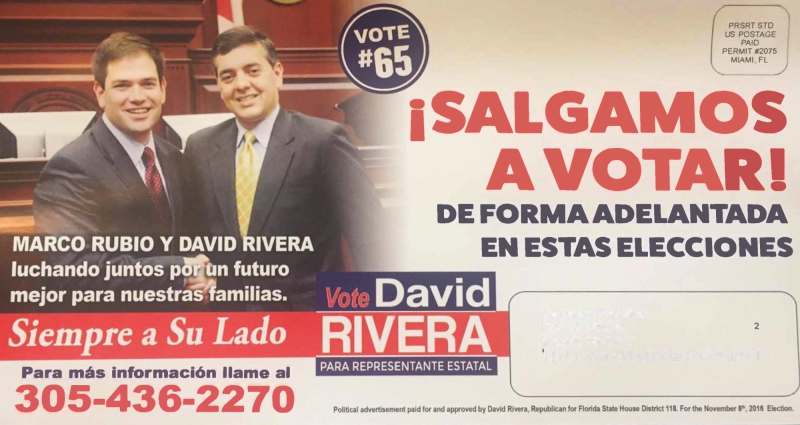 Trying to capitalize on his most famous political friend, David Rivera sent Miami voters a new flier this week prominently featuring an old photograph with none other than Marco Rubio.

"Marco Rubio and David Rivera fighting together for a better future for our families," it reads, in Spanish. "Always by your side."

Rivera doesn't tout an explicit Rubio endorsement. But it certainly implies one.

Rubio, who is busy with his own reelection campaign to the U.S. Senate, hasn't endorsed anyone in Rivera's race. Rivera is vying to return to the state House, four years after losing his seat in Congress under a cloud of political scandal.

Ever since, Rubio has maintained a public distance from Rivera. They sold the house they jointly owned in Tallahassee last year, as Rubio embarked on his presidential candidacy. Earlier this year, Rivera quietly campaigned for Rubio in Iowa ahead of the first-in-the-nation caucuses. Rivera announced his candidacy the day after Rubio lost the Florida primary and dropped out of the race.

Rivera served as Rubio's rules chief when Rubio was Florida House speaker, and their friendship dates to long before then. The photo used in the flier shows both men when they were much younger, smiling and shaking hands in what appears to be the House floor.

This year, Rivera is embroiled in an ugly contest in House District 118 against Democrat Robert Asencio.

An earlier version of this post misstated the number of the district Rivera is seeking.