Rubio: 'We're not going to be held hostage to whatever Patrick Murphy's mood is' on debates 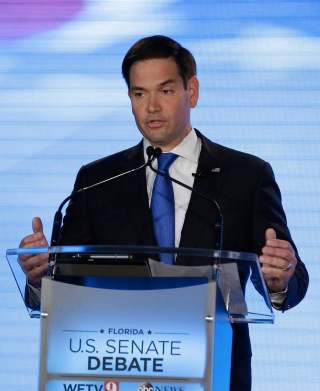 Republican U.S. Sen. Marco Rubio has ruled out the potential for any additional debates after Wednesday night's showdown with Democrat Patrick Murphy at Broward College -- what will be their second of two scheduled debates this fall.

"It's going to be the final one, because we're not going to keep playing this game," Rubio told Adrian Whitsett of WESH 2 News in Orlando over the weekend.

Rubio's comments came a day after Rubio and Murphy quarreled over who was to blame for the cancellation of what could have been their third debate, organized by Univision.

The Spanish-language network took the event off the table after Murphy's campaign objected to the station's proposal -- which Rubio supported -- of having the debate in Spanish with a translator for Murphy. Murphy wanted the debate in English and then dubbed for the Hispanic-viewing audience. (His campaign accused Rubio of seeking unprecedented rules.)

In writing off any possible future debates, Rubio essentially told WESH that the clock had run out with two weeks left until Election Day.

"We have things to schedule, places to be and things to do," Rubio said. "We're not going to be held hostage to whatever Patrick Murphy's mood is in the morning when they call him about debates."

Murphy's campaign on Tuesday said the Jupiter congressman still wants more debates against Rubio and that it was continuing to negotiate terms for a possible debate in English with Spanish-language network Telemundo in Orlando. Murphy's campaign first broached the prospect for that debate on Friday after negotiations for the Univision debate were kaput.

But the Telemundo debate is apparently a no-go for Rubio, whose campaign referred the Herald/Times back to Rubio's comments to WESH when asked about it Tuesday.

Murphy's campaign argues Rubio is "trying to hide from voters" by not even attempting more debates.

However, it's only been in the past few weeks that Murphy himself has been eager to finalize additional debates. (For instance, Murphy agreed to the Univision debate two weeks ago -- a month after Rubio had, which is why Murphy was late to the negotiating table for that one.)

Rubio and Murphy have been debating over debates for almost two months with little common ground and lots of finger-pointing.

The day after the Aug. 30 primary, Rubio laid down a challenge for him and Murphy to have six debates before Nov. 8 including one on Spanish-language TV. Murphy avoided committing to that proposal but said he wanted multiple debates.

Two weeks later, Rubio's and Murphy's campaigns each released a list of debates that they'd accepted invitations to, but their lists matched up on only two events: their debate Oct. 17 in Orlando and Wednesday night's planned debate at Broward College. (Murphy didn't budge from his list and Rubio resisted some of Murphy's suggested events, claiming concerns of bias from the sponsors.)

A few days after that, Murphy's campaign was quietly rejecting at least some additional debate opportunities Rubio had agreed to -- such as one proposed by the Miami Herald and CBS4 Miami and another proposed by the Tampa Bay Times.

Murphy's urgency in wanting a debate sponsored by a Spanish-language media outlet began earlier this month, after his campaign had stepped up its outreach to Hispanic voters in late September.