Sunshine State survey: Economy and environment are the major concerns of Floridians 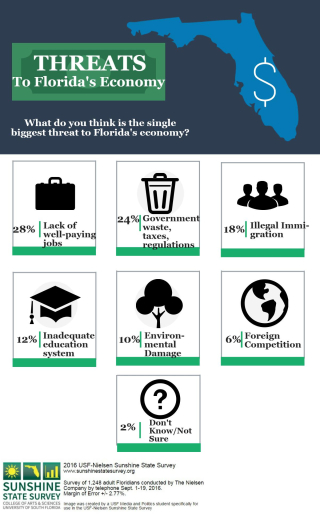 A summer of water woes and uneasiness about the state’s economic future have led Floridians to identify the economy and the environment as their top concerns as they head to Election Day, according to the 2016 Sunshine State Survey released by the University of South Florida on Thursday..

The annual poll, done by the University of South Florida and Nielsen Surveys, found that 63 percent of all Florida households say they experience some financial stress, 28 percent blame their economic insecurity on low-paying jobs, and a slim majority of Floridians — 51 percent — would support a $15 state minimum wage.

“You cannot under-estimate how household finances affect everything,” said Susan MacManus, USF professor of political science who conducted the survey. “You can see it in just about every poll, and no matter who wins the election they are going to have to deal with this problem because it is not just registered voters who are feeling this way. Every race from top to the bottom is going to feel it.”

The results are the first in a series of reports to be released by USF in an effort to guide state and local leaders to focus on issues relevant to Floridians. The survey of 1,248 Florida residents from Sept. 1 to Sept. 19 was done using live telephone interviews of cell phone and landline phone numbers. The margin of error is plus or minus 2.77 percentage points.

While 24 percent of those surveyed cited the economy as their top concern, the issues next in line were the environment (13 percent), crime and policing (11 percent), education and schools (9 percent), government officials (5 percent), healthcare (5 percent), and immigration (5 percent), the survey found.

Water-related problems are the top environmental concern of 34 percent of those surveyed, with the highest intensity focus from residents in the Palm Beach and Naples regions — areas hardest hit by the toxic algae outbreaks earlier this year, the survey found.

Another 20 percent cited the loss of natural lands for wildlife and 18 percent, including a majority of those surveyed in the Miami-Dade and Fort Lauderdale region, say that climate change is the greatest economic peril the state faces.

“The most important thing this survey shows is that people still have a lot of anxiety about their household finances and, as long as people are concerned about that, it affects every other dimension of their lives,” MacManus said.

The survey shows that the “the economy has not fully recovered,” she said, although there are pockets of improvement. Financial stress is greatest among households with a child, low-income earners, and Floridians without a college degree, the survey showed. The proportion of Floridians feeling stress, however, fell 8 percent since last year to 64 percent.

When asked what factors are the greatest threat to Florida’s economy, 28 percent identified the lack of well-paying jobs, the survey found. Another 24 percent cited government waste, taxes and regulations, and 18 percent identified illegal immigration. Those top three concerns encompassed 70 percent of all responses.

The focus on the environment as a top concern behind the economy should not surprise anyone who has lived in Florida, MacManus said.

“Florida’s economy has long been closely linked to its environmental assets,” she said.

But the survey found that Florida residents are also not happy with the way government is handling sinkholes, especially in the wake of reports that the state waited three weeks to notify residents that a massive sinkhole had drained pollutants into the Floridan✔ Aquifer from the Mosaic phosphate processing plant near the Hillsborough-Polk county line and was potentially contaminating the drinking water supply.

More than half of the respondents rated the state’s performance as fair or poor, with residents of the Tampa Bay and Miami/Fort Lauderdale areas most disapproving of the state’s efforts to address sinkholes (26 percent and 23 percent, respectively).

“Sinkholes are unsettling because it starts to affect insurance rates and housing and development decisions,” MacManus said. “It also leaves people with an enormous sense of uncertainty.”

MacManus also warned that these uncertainties could drive the election – from the presidential race to local offices.

“I don’t think you can underestimate the impact,” she said. “People in Florida get the fact there is a relationship between our state’s economy and the environment and, every time there is a major event – like Zika or a hurricane – it creates more stress.”