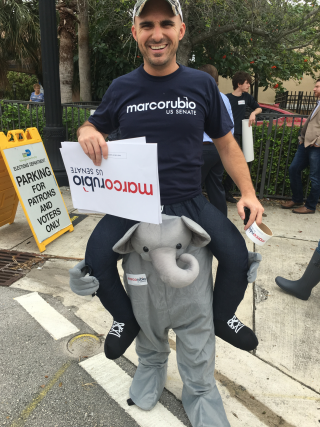 When Halloween hits during early voting in a U.S. Senate race, the candidate's troops go to the polls in full force. Sometimes, they're even in costume.

Republicans. Elephants. Get it?

Swensen was hard at work ahead of Rubio's appearance to vote early at the West Miami Community Center. He rallied supporters, handed out campaign signs and sported a Rubio T-shirt himself.

The tiny legs over the GOP elephant, though, were appropriately spooky for All Hallows' Eve. No mask required.