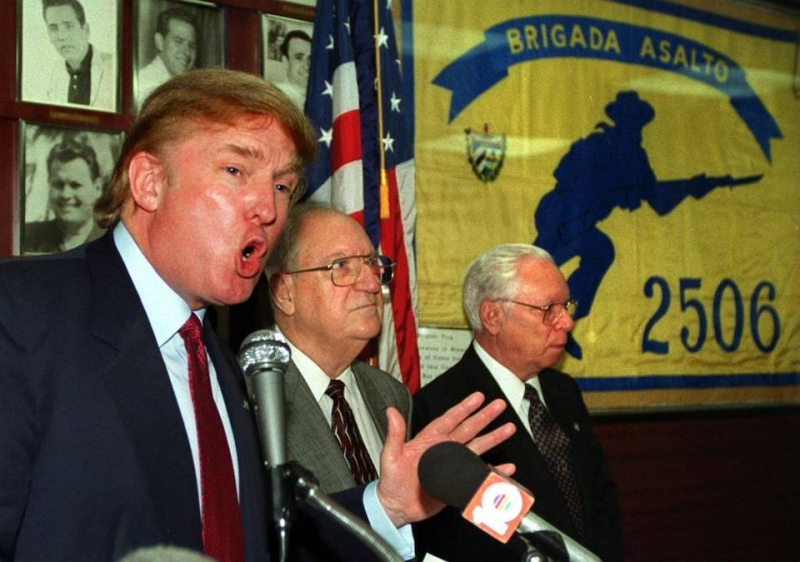 Miami's veterans of the Bay of Pigs invasion saluted Donald Trump picking him as the group's first-ever presidential endorsement. Now Trump is preparing to return the favor.

Trump plans to visit the 2506 Assault Brigade museum and library on Tuesday, the Miami Herald has learned. The Brigade emailed its members over the weekend to inform them that "we were contacted by his campaign to coordinate a visit...to discuss the Cuba issue."

Brigade 2506's executive board voted unanimously 10 days ago to back Trump. The group had never before made a presidential pick in its 55-year history. The endorsement came after Newsweek reported that Trump's casino company had violated the U.S. trade embargo against Cuba in 1998, when it paid a consultant to explore business opportunities on the communist island.

Days before that revelation, Trump the presidential candidate had pledged in Miami to espouse a hard line on Cuba policy, reversing President Barack Obama's approach.

Trump had said in a 1999 speech to the Bay of Pigs veterans that Fidel Castro has "been a killer." "He's a criminal, and I don't think you should reward people who have done what he has done," Trump said. The crowd cheered, "¡Viva Donald Trump!"

His local backers have pointed to that speech and a Herald op-ed at the time to evidence that Trump -- even if he did spend money in violation of the embargo -- changed his mind about it later.

"The Brigade's board is very proud about Mr. Trump's statements about canceling and reversing all the concessions made by President B. Obama to the dictatorship of the tyrants to our Homeland, trying to guarantee that they remain in power," reads the Brigade's email about Trump's visit to the group's "house." The museum is located at 1821 SW 9th St.

Recent polls show Trump splitting or only narrowly defeating Clinton among Florida and Miami-Dade County Cuban Americans, a sign that he has been unable to shore up support like his Republican predecessors have. Cuban Americans make up more than 70 percent of Miami-Dade's registered Republicans.

Trump's public schedule lists him holding a rally at 3 p.m. Tuesday in Sanford. He's been in Florida since late Saturday night, ahead of three days of campaigning in what for him is a must-win state against Hillary Clinton.