Unable to travel to Miami, Obama calls into hip-hop station instead 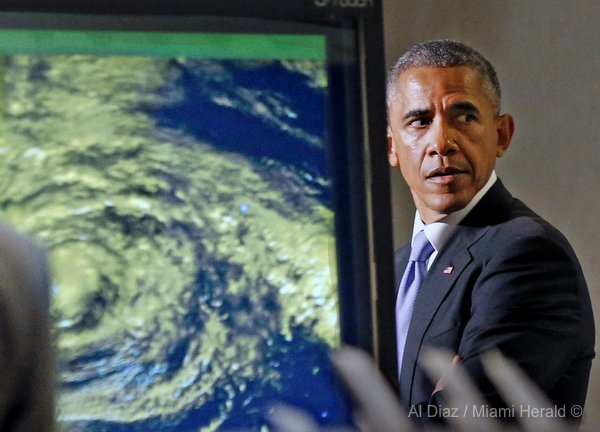 Hurricane Matthew kept President Barack Obama from traveling to Miami as planned Wednesday to campaign for Hillary Clinton. So instead, the president hopped on the phone with a friendly local radio station during afternoon drive-time — the second time he’s done so in as many months.

His political task was to urge voters — especially African Americans — to register ahead of the Tuesday deadline in Florida. But first things first: Obama couldn’t avoid a storm question.

“The one thing I want everybody to do is to make sure they’re listening to their local authorities,” he told host Felisha Monet, host of “The Afternoon Hustle” on WEDR-FL, better known as 99 Jamz. “I was supposed to be in Florida today, but I couldn’t do it because I didn’t want to take away assets as people are preparing.”

Monet noted the popular hip-hop station had canceled a voter-registration drive because of the storm.

“Everybody who’s been paying attention to this campaign should know: We’ve got a big choice ahead of us. When I came into office, the country was in terrible shape,” Obama said, before pivoting to the upcoming election to say Donald Trump would “reverse” his legacy.

“Hillary Clinton would continue it,” Obama said. “So people need to make a decision about whether we’re going to continue on the progress that we’ve made.”