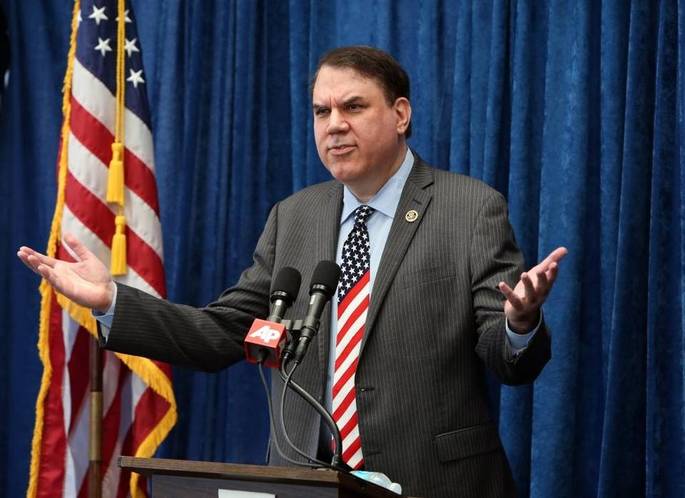 U.S. Rep. Alan Grayson is holding on to his grudge against U.S. Senate candidate Patrick Murphy and the Democratic Party establishment that helped Murphy beat Grayson in the Aug. 30 primary.

Since that loss, the sometimes polarizing and notably bombastic Orlando congressman had largely kept a low profile. Grayson has maintained his campaign email list but has used it mostly just to send out fundraising pitches in support of like-minded progressive candidates across the country.

But on Tuesday night, Grayson unloaded to his supporters.

In a scorched-earth rant entitled "What $10 million buys from the Democratic Party," he vented his bitter frustration about Murphy and Democratic Party leaders. The piece is riddled with attacks and accusations against Murphy, his wealthy father and Democratic leaders and fundraising groups -- none of whom have responded to requests for comment from the Herald/Times.

So given his clear disdain, whom is Grayson voting for this fall?

The soon-to-be outgoing congressman reiterated in an email to the Herald/Times: "I will be voting for Hillary Clinton for president. I haven’t decided who will get my Senate vote, but it will not be Patrick Murphy."

In his email blast, Grayson claims a "Murphy political operative" told someone within his own campaign earlier this summer that Murphy's father, Tom Murphy Jr., had made a promise wherein "the Democratic Party could expect to see $10 million if it delivered the nomination to [Patrick] Murphy."

Tom Murphy has given large sums of money to support his son's candidacy, but his nearly $3 million in contributions so far is still a far cry from the $10 million Grayson alleges he promised.

Grayson argues it's "implausible ... without Tom Murphy’s promised cash" for both the Senate Majority PAC (a Democratic super PAC) and the Democratic Senatorial Campaign Committee to have afforded pledges last spring for $10 million each in fall ad time to help Murphy.

Both the DSCC and the Senate Majority PAC ultimately withdrew most of their money -- $16 million in all -- after Patrick Murphy didn't fare so well in the initial weeks of the general election contest against Republican Marco Rubio. The Senate Majority PAC later changed its mind and brought back at least a bit of its money but nothing close to what it first pledged.

Grayson said that the alleged promise from Murphy's father explains why Senate Minority Leader Harry Reid "had been interfering in my primary and belligerently attacking me personally for months."

Reid did openly support Murphy over Grayson and he did publicly call on Grayson to end his campaign after a string of media reports revealed more about Grayson's controversial management of off-shore hedge funds -- which made him the subject of an ongoing ethics investigation. Reid and Grayson also famously clashed in May when Grayson confronted him at a caucus meeting.

Grayson went on to write, "without Daddy’s promise of $10 million, it would be very hard to explain why Senate Democrats would give a fig for Patrick Murphy."

Grayson insulted Murphy as being "completely bereft of any legislative accomplishments" and claimed Murphy's "main goal in Congress seems to have been to try to set some kind of record for party disloyalty," because he voted against the Obama administration on some high-profile measures, like the Keystone pipeline. (Murphy was a Republican before he became a Democrat shortly before he launched his first congressional campaign in 2011.)

Touting his own congressional accomplishments as he commonly did on the campaign trail, Grayson says "what else could it be?" that caused the Democratic Party to take sides in a contested primary race.

"All I know is that just getting a whiff of $10 million of Tom Murphy’s money, just a glance at that mirage, was enough to turn my party against me – in favor of someone contemptuous of my party and its principles," Grayson wrote.

He ended the note by saying: "I once told a national TV audience, 'you have only three friends in life: God, your mama, and the Democratic Party.' Cross that last one off the list."