Bob Graham blasts Amendment 1 as 'deceptive', unneeded and will 'accelerate the decline' of solar 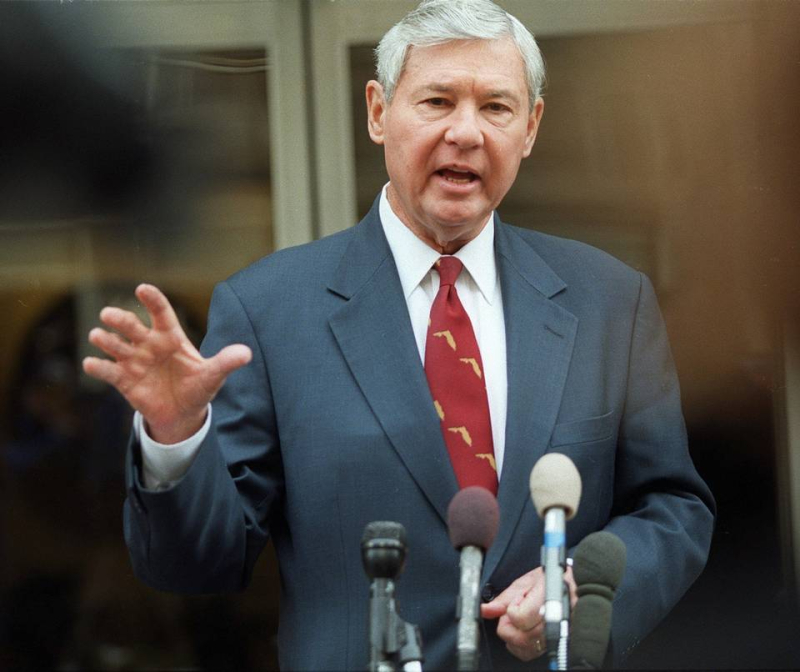 “I’m discouraged as a citizen how far we have slipped and see Amendment 1 as a means of accelerating that decline in solar in Florida,’’ he said in a conference call with reporters.

Graham, a Democrat, suggested that by rejecting the amendment, voters could send a message to the Legislature that they want the utilities to join with solar advocates “to have a constructive discussion” and instead use the vote “as a springboard for a positive, better energy future for Florida.”

He said Florida should follows Georgia’s lead and pass laws that make it easier for property owners to allow third parties to install solar panels on their roofs, not discourage them, and require utility companies to increase the amount of electricity they generate using solar power.

But, he warned, if the amendment passes, “it will discourage the expansion of solar by psychologically strengthening the position before an already compliant Legislature and Public Service Commission to erect barriers to solar.’’

"There is no need for a constitutional amendment with this language as it relates to solar energy in Florida,'' he said. "The Public Service Commission and the Legislature have all the authority to do what this amendment purports to do -- whether it's on safety, access, taxation or regulation."

The utilities argue that because homeowners with solar panels still rely on the grid for electricity at night and on cloudy days but they don’t compensate the utilities enough to maintain their power plants, transmission lines and maintenance crews. The emerging argument is that net metering laws that allow homeowners to be reimbursed for the excess energy their solar panels generate, and tax rebates to solar customers, are unfair subsidies intended to benefit solar users at the expense of non-solar users.

“We are opposed to subsidies that are unfair and regressive,’’ said Rob Gould, spokesperson for Florida Power & Light in an email to the Miami Herald and Tampa Bay Times. “There’s a difference between governmental tax break/credit subsidies [such as the property tax credits for solar installations] and subsidies that benefit certain customers on the backs of other customers (rebates, net metering, etc.).”

Gould wouldn’t say explicitly what the legislative agenda would look like to oppose these “subsidies” but many in the industry have made it clear they want to roll back the current net metering law that, as utilities have in other states.

Suzanne Grant, spokesperson for Duke Energy, said in an email that the utility believes “the current net metering policy needs updating, and we believe customers who use the power grid continuously, like solar customers, should pay for grid access, grid services, and the back- up power they use.”

But Graham called the subsidies concept is “a false argument.” He cited studies commissioned by state regulators in states such as Nevada and Mississippi and complied by the Brookings Institution that conclude that costs associated with more rooftop solar are generally outweighed by benefits.

“The installation of solar saves customers money because it avoids having to build additional generating capacity the cost of which in Florida not only gets passed along to ratepayers once those plant are in operation but, as we learned with Duke Energy on the Gulf Coast, they got paid in advance for build nuclear plants that were never constructed,’’ Graham told reporters, referring to the nuclear cost recovery fees approved by the Legislature and regulators.

Solar advocates argue that it also provides a net benefit to other utility customers because it alleviates the need to fire up expensive “peaker” power plants when utility use is at its peak, reduces demand for energy delivered by power plants that emit carbons, and offsets the need to construct new power plants.

He also warned that if the amendment passes, it could offset the benefits of the the solar amendment approved by voters on the August ballot, Amendment 4, which prohibits tax increases on commercial property that increases in value because of the addition of solar panels. Voters approved that amendment by 73 percent of the vote.

Amendment 1 would "encourage increased taxes on the installation and maintenance of those solar facilities which could counter-balance the economic incentives that Amendment 4 was intended to provide,'' Graham said.

He echoed the argument of other solar advocates that Amendment 1 is deceptive because it leaves the impression that solar could expand in Florida.

"If you see what's being said and placed before us on our television set, you get the impression that this a is pro solar; this will make our electric system safer -- without any definition of what that means,'' he said. "This is deceptive in that all the things the advocates could say could happen with this amendment can happen without this amendment. You don't have to have a constitutional amendment to have adequate regulatory power over solar. You don’t have to have a constitutional amendment to have safety.”