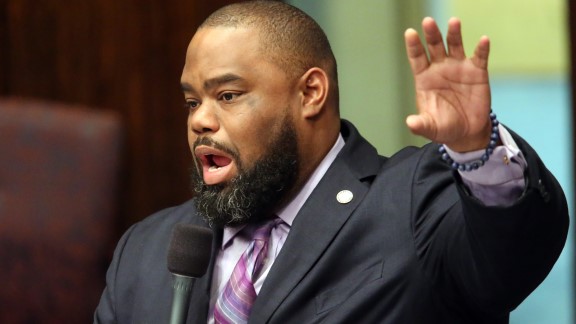 Sen. Dwight Bullard, who wants to run for Florida Democratic Party chair, is facing resistance from some Jewish Democrats after he was accused of meeting with a man linked to a terror group in Israel earlier this year.

Bullard says that the accusation lacked “merit” and that he is a supporter of the Jewish community.

Bullard is one of multiple  candidates who are considering the state party position after Allison Tant announced Friday that she would not seek re-election in January. That could set off an intraparty fight about who would be the best person to lead the Democrats after it suffered crushing defeats including Hillary Clinton’s loss to Donald Trump in Florida.

The Bullard name is a longtime fixture in Miami-Dade politics because both of his parents served in the state Legislature. But he could face an uphill battle for state party chair due to his position on Israel.

A political committee for Florida Senate Republicans ran an ad this summer accusing Bullard of spending time with a "terrorist" during a trip to the Middle East.

NBC6 Miami reported that Bullard was photographed with a tour guide affiliated with the anti-Israel BDS movement, a pro-Palestinian group with ties to the Popular Front for the Liberation of Palestine, designated by the State Department as a terrorist group.

Bullard told the station the man was a "tour guide in old Jerusalem" and he "had no idea" of his political affiliations.

He told NBC6 that he is "pro-Israel, but I'm also pro-Palestine in that people can co-exist. ... My position is co-existence."

Bullard also faced heat for his vote in October 2015 against a bill that would ban the state of Florida from entering contracts with companies that boycott Israel. But when it reached the full Senate in January he voted for it and it passed unanimously.

“A number of folks called me concerned over my committee vote,” he told the Miami Herald. “For the sake of not being the thorn in anyone’s side I decided to vote for it on the floor.”

He told the Miami Herald that he shared the same concerns as the ACLU of Florida which wrote in a letter to Gov. Rick Scott that the bill “is a clear violation of of long established First Amendment law.” The ACLU urged Scott to veto the bill but he signed it into law.

Bullard told Colorlines, an online news site about race and culture, that boycotts are protected free speech: "We look back now in hindsight and say, '[Fighting] for the boycott and divestment movement against the South African government was the right thing to do.' How that is somehow different as it pertains to Palestinian rights is really inexplicable."

Fort Lauderdale lawyer Mike Moskowitz, who raised $1 million for Clinton and is a frequent contributor to Democrats, said he will actively work against Bullard if he runs for chair and will call activists and members of Congress to urge them to oppose Bullard.

“I will discontinue all financial support if he becomes the chair; and will call around to all financial donors in the entire state and ask that they commit to do the same,” he said.

“I think he is just wrong on this issue,” he said. “Did the Republicans take it a little too far? Yes. Do I think Dwight is a terrorist? Not at all."

But Geller said that Bullard should have disassociated himself with the anti-Israel BDS group.

Geller and Moskowitz don’t get to vote on the chair position -- that decision lies with state committeemen and women in January. But those who have a vote are likely to listen to input from prominent fundraisers and elected officials who could play a role in the 2018 races for governor and U.S. Senate. Committeemen and women in South Florida play a major role in selecting the chair because they get votes based on a formula that takes into account the number of registered Democrats in their county.

Bullard told the Miami Herald that he will seek re-election as county party chair Dec. 6th and then run for state chair.

He said that Jewish Democrats should not be swayed by the attack on him about his Middle East trip.

“I would hope they would hear me out and not fall victim to a political smear campaign that has no merit,” he said.  “I never met with a terrorist. Did I take a trip to Israel and the West Bank? Absolutely. The notion that I am anti-Israel and pro-terrorism, that was all orchestrated unfortunately by my opponent. I’ve never been any of those things. I continue to be a strong supporting of the Jewish community.”

Bullard lost his state senate race to Republican State Rep. Frank Artiles in a heavily Hispanic Miami-Dade district. The attack ad about Bullard’s trip to Israel was in Spanish.

Evan Ross, a member of the Miami-Dade Democratic Party and a political consultant who is Jewish, also raised concerns about Bullard.

“Having a party chair who supports BDS and speaks out against Israel’s right to exist as a Jewish state would do irreparable harm to the relationship with the more than two-thirds of Jewish Floridians that consistently support Democrats,” Ross said. “We need a chair who will unite people at this critical time for our party, state and nation.”

Democratic activists do not appear to have coalesced around any single candidate so far for chair and many of them have lost previous races including Annette Taddeo, who most recently lost a Miami-Dade primary for Congress; Alan Clendenin, who lost to Tant in 2013 and recently lost a bid for a Hillsborough County School Board seat and former state Sen. Dan Gelber who lost a race for attorney general against Pam Bondi in 2010.