Bondi's widely-anticipated departure would give Gov. Rick Scott the power to appoint an attorney general through the 2018 election. If Scott wants to keep peace with his fellow Republicans, he will pick a caretaker, somebody who takes the job on one condition: not to run for a full four-year term in 2018. Scott has senatorial aspirations in 2018 and could make enemies if he's seen as taking sides in what at the moment looks like a crowded GOP primary.

Whoever gets chosen gets a two-year Cabinet gig, likely followed by a big-ticket job offer at any of the state's most prestigious law firms. So here are five names mentioned in speculation for the job:

* Pete Antonacci. A Scott favorite plucked from the Gray Robinson firm, he was the governor's top lawyer before being appointed as scott's hand-picked choice to run the South Florida Water Management District last year, a job he says he loves. He knows this territory well and was deputy attorney general for most of the 16-year tenure of former A.G. Bob Butterworth, a Democrat. Asked about his interest in the job, Antonacci told the Times/Herald: "That's not for me to say. It's the governor's decision." 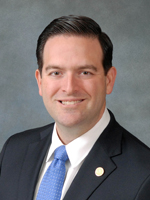 . An outside-the-box name, a rising star in the House, a Miami land use lawyer and graduate of Columbia Law School, the Miami legislator would be the state's first Hispanic attorney general. His name and background would be seen as an asset on the statewide GOP ticket in two years.

* Tom Grady. Scott's good friend and next-door neighbor in Naples, a securities lawyer and former state House member, has been a past Scott pick for the state Board of Education. He briefly ran the Office of Financial Regulation and faced controversy over his travel while at the helm of Citizens Property Insurance Corp.

* Jesse Panuccio. Also a Scott favorite, he was the governor's counsel in his first term and ran the Department of Economic Opportunity, where he ran into some rough sledding with the Legislature before leaving last year for private practice at Foley & Lardner. He also is a Scott appointee to the Supreme Court Judicial Nominating Commission.

* Kent Perez. A steady hand and political survivor, he has been in high-level positions in and out of the A.G.'s office since 1994 under three bosses and currently serves as Bondi's general counsel and acting chief of staff. He could be expected to keep the ship on an even keel and has no aspirations to hold elective office.

Here's another scenario to ponder. Bondi could be appointed to a White House post that requires confirmation by the U.S. Senate, a process that could drag well into next year. Scott might consider Senate President Joe Negron, R-Stuart, who's rumored to be interested in running for the job in 2018 and could potentially be considered after serving for a full session in his current post.