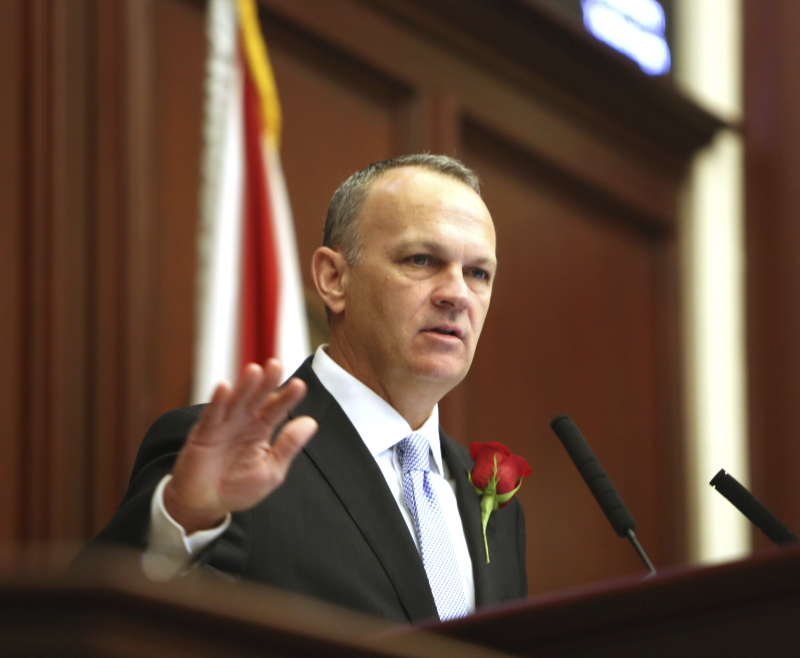 In some of his first remarks as the new Florida House speaker, Rep. Richard Corcoran lashed out at the state's largest teachers union on Tuesday, calling the organization "downright evil" for continuing to challenge a Legislature-approved tax credit scholarship program in court.

Corcoran, a Land O'Lakes Republican and a staunch supporter of school choice, declared that the Florida Education Association is "fixated on halting innovation and competition" -- citing the ongoing fight over the Florida Tax Credit Scholarship program as an example.

The program helps low-income, mostly minority children afford to attend private schools, and the union has been fighting it in Florida's courts for almost a couple years, arguing it's a "voucher" program that diverts would-be tax money from traditional public education.

"They [the union] are attempting to destroy the lives of almost 100,000 children, mostly minority, and all of them poor. This flies in the face of research. It defies common sense.  It is downright evil," Corcoran said in a speech after accepting the speakership.

In later remarks to reporters, Corcoran doubled-down, elaborating that the union's actions were not only "evil" but also "disgusting" and "repugnant."

He also referred to the teachers union as "crazy people" and said they have a false, "crazy a-- notion" about what is and isn't a fair law.

"The fact that you have these children who are dying to get out of a failure factory and go to a place where they have an opportunity and a hope for a real life, and a real possibility of doing something great with themselves -- and you have these people trying to destroy that, it's one of the lowest marks of any special interest group I've been familiar with. Ever," Corcoran said.

The FEA has -- unsuccessfully so far -- tried to get legal standing in Florida courts so that it can challenge the constitutionality of the tax credit scholarships. (That matter is before the Florida Supreme Court.) The union argues the program diverts money that would otherwise go to the state’s coffers and help fund public K-12 education.  Florida businesses earn dollar-for-dollar tax credits by donating to designated organizations -- primarily "Step Up for Students" -- which fund and distribute the scholarships.

It's among the school choice innovations that the union and, in general, Democratic lawmakers have opposed in recent years. They continue to argue the Republican-led Legislature should, instead, focus on beefing up conventional schools, which they say are strapped for funding and resources.

In a public statement on Facebook, FEA president Joanne McCall wrote in response to Corcoran: "Hold your powder! We are going high as he goes low." -- a reference to first lady Michelle Obama's famous phrase from her speech at this summer's Democratic National Convention.

"The Florida Education Association firmly believes that people of opposing views should always engage in civil debate on issues," McCall continued. "We would welcome the opportunity to discuss with Speaker Corcoran the reasons FEA has engaged the court in the voucher program. We are here when and if the Speaker would like to hear from us."

House Democratic leaders took less kindly to Corcoran's blunt words, calling his comments "an unnecessary and unwarranted attack on the thousands of women and men who have devoted their lives to educating our children throughout the state."

"Instead of demonizing our teachers, we should be celebrating the incredible work they do and focusing how can we best provide a quality public education, as the Florida Constitution requires, to every child," House Democratic Leadership -- led by Minority Leader Janet Cruz, D-Tampa -- said in a joint statement.

The leadership added that they "support the FEA’s lawsuit against Florida’s tax-credit scholarship system because we believe that rather than giving up on our public education system, we should focus on providing the funding and resources our public schools need to succeed."