« Does Florida's Republican Party chairman Ingoglia already have a second term sewn up? | Main | Does Pam Bondi want to face a Senate confirmation? » 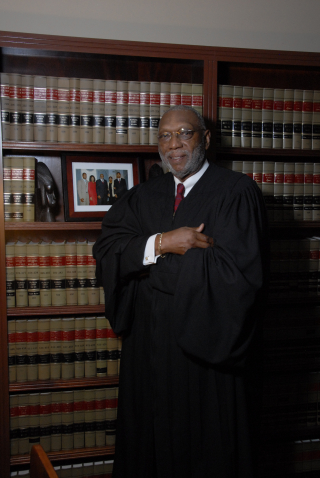 Gov. Rick Scott’s goal of reshaping the Florida Supreme Court drew closer Monday as the nominating commission controlled by the governor interviewed 11 candidates and nominated three who demonstrated they are judicial conservatives.

The Supreme Court Judicial Nominating Committee sent the governor three candidates to replace Justice James E.C. Perry, one of two blacks on the high court, from the list of six women and five men, all of whom are white. Perry, 71, is retiring from the seven-member bench on Dec. 30 because he has passed the state's mandatory retirement age of 70 for judges. The appointment will be Scott’s first to the state’s highest court.

After more than six hours of interviews, the JNC narrowed the list of candidates to three: Wendy Berger, a 5th District Court of Appeal judge, C. Alan Lawson, chief judge of the 5th District Court of Appeal in Daytona Beach, and Daniel J. Gerber, of the Orlando office of the law firm Rumberger, Kirk and Caldwell. Both Lawson and Gerber were nominated when Perry was named to the bench in 2009 by then-Gov. Charlie Crist.

The three candidates were heavily promoted by members of the Florida chapter of the Federalist Society, a conservative libertarian lawyers group many of whose members serve as the governors’ appointees to the JNC. They promote the originalist judicial philosophy promoted by the late U.S. Supreme Court Justice Antonin Scalia that adheres to the notion that interpretation of law should be based on the original meeting of the text of the statute or the Constitution at the time its enacted.

The appointment of a conservative to the seven-member bench will allow the governor to add another justice to the court's conservative minority, now comprised of Justices Charles Canady and Ricky Polston.

A former circuit court judge in Seminole County and graduate of Columbia Law School, Perry has frequently joined with the moderate members of the court's majority in several cases that have invalidated laws passed by the Republican-led Legislature and the Republican governor.

The nine members of the JNC focused on probing the candidates’ willingness to overturn previous court rulings.

They asked the candidates about their approach to ruling on a legal doctrine known as stare decisis, the principle that the court adheres to the precedent set in earlier cases.

“Would you ever follow a precedent that you thought was wrongly decided?”' asked Dan Nordby of the Shutts & Bowen law firm in Tallahassee, to several candidates. Nordby represents the Republican Party of Florida and was in-house general counsel for the Florida House of Representatives from 2012-14 which was on the losing side of the Supreme Court's rulings on the Fair Districts lawsuits over redistricting.

Berger, who was appointed to the 5th District Court of Appeal by Scott, responded: “There’s a time when you can throw stare decisis aside if it’s wrong” but added that she would look at it “on a case-by-case basis.”

Lawson described his judicial approach as “originalist” and Jesse Panuccio, Scott’s former general counsel and a member of the JNC, asked Lawson what happens when “originalism bumps up against stare decisis” precedent?

He answered that legal precedent should be maintained when “society has built up an expectation” and the ruling could do economic damage. He also added the Legislature can change the law if they don’t like the ruling.

Gerber, of the Orlando office of the law firm Rumberger, Kirk and Caldwell, touted the fact that he once worked in Washington, with conservative former Florida Congressman Bill McCollum, R-Sanford.

He commended Canady for his judicial philosophy and for his frequent dissenting opinions.

"The brilliance is there,’’ Gerber said. “Every Thursday you look and say, okay, let's see what the dissenting opinions have brought this week?”

Conservatives believe that the candidates sent to the governor are less likely to find ambiguity in laws passed by the Republican-led Legislature and signed by Scott.

"The governor should be very proud of the work of the Judicial Nominating Nominating Commission,’’ said Jason Gonzalez, co-chair of the Florida chapter of the Federalist Society. “All three nominees are imminently qualified and have demonstrated a textualist judicial philosophy similar to that of the late Justice Antonin Scalia."

Seminole County Circuit Judge Michael Joseph Rudisill echoed the sentiments of many of the candidates interviewed in the Orlando law offices of GrayRobinson when he vowed: “I will bring to the bench a core set of conservative principles,” he said. “I've got a lot of friends in the Legislature or formerly in the Legislature” and “I know politics.”

Alice Blackwell, a circuit judge in the 9th Judicial Circuit in Orlando, told the panel: “I’m conservative in my approach … I’m not an activist judge.” When asked to explain herself, Blackwell said, “to me, that means figuring out what do the words mean that are in the law.”

Brad King, who is the state attorney for the 5th Judicial Circuit, said that as a prosecutor who has advocated for the death sentence in 38 pending cases, he would have to remove himself from ruling on any capital case that came from his circuit and is before the Supreme Court.

King was among the state prosecutors who urged the Legislature to reject calls to change Florida’s law and impose a unanimous jury verdict in death sentencing cases in response to U.S. Supreme Court rulings this year. He recommended lawmakers switch to a 10-2 jury recommendation before the death sentence can be imposed. The Florida high court rejected that law, forcing all death cases to be put on hold unless the Legislature rewrites the law again.

State Rep. Larry Metz, a Yalaha Republican, ended his JNC interview by telling the group that he had recently been diagnosed with Parkinson’s disease. “I don’t think it changes anything and it’s not tempering my desire to serve,”' he said.

Several candidates said they admired the work of Canady, the court's most conservative justice, but no one mentioned the moderates who comprise the court majority.

“They’re asked to pass judgment on procedural trial court error,” Berger said. “If you want to call balls and strikes, you ought to play the game.”

Sandy D’Alemberte, former dean of the Florida State University School of Law, said he hoped the nominees sent to the governor would not be selected based on judicial ideology but merit and integrity.

“I hope we don't get people who want to portray themselves with some partisan extremist ideal,” D’Alemberte said. “Even people who come up through this appointment process are capable of having integrity.”