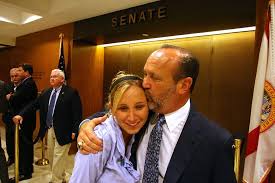 Ron Book sat in the Florida Senate's public gallery with tears in his eyes as his daughter was named to the honorary role to lead the Democratic caucus.

"That was an 'Oh my God' moment,'' he said after freshman Sen. Lauren Book of Plantation was named Senate Democratic leader pro tempore.

It was 15 years ago this past August when Book and his wife discovered Lauren had been sexually abused by their former babysitter. The experience led her to a career as a prominent advocate for victims of childhood sexual abuse, the founder and CEO of Aventura-based Lauren’s Kids, and in August, the uncontested election to the Florida state Senate.

"You don't know as a parent what that journey's going to be,'' Ron Book said, but to have been able to walk into the newly-renovated Senate chamber, to a place he regards with respect "was just one of those special moments.

Book, who is known as one of the Capitol's most veteran and successful lobbyists, acknowledged that he has been slowed somewhat in recent months after having suffered a bone infection after foot surgery. In July, he was diagnosed with an aggressive tumor on his prostate and is undergoing radiation treatment.

"I've had a very rough couple of months,'' he said. "I'm going to be alright over time, but I'm still sort of experiencing those side effects every day."

A tireless worker, he said it has been difficult to scale back his work hours. He said his 18-hour days have become more like eight and 10.

Tears welled in his eyes again as he pulled up photos from his Iphone of the twins in utero that Lauren and her husband are expecting in February. He proudly proclaimed the girl would be  named Kennedy Grace and the boy named Hudson Lee. The family will move to Tallahassee for the session and Grandfather Book expects to have an active role.

"I have refused to use aging-connotative names,'' he said, bristling at the suggestion of being called "grandpa." Instead, he said he is going to become known as "Coach." To make sure his carefully-tailored suits are not soiled when he cares for the babies, he has ordered six lab coats that say "Coach" on each one.