Debate over revision to Florida's 'stand your ground' law returns 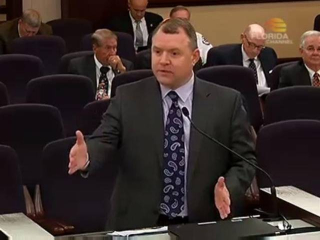 State Sen. Rob Bradley is renewing his effort to change Florida's "stand your ground" law in a way that prosecutors have said could make it harder for them to try cases.

Bradley's legislation in the 2016 session was the subject of much debate, because critics argued it would force prosecutors to essentially try a case before it actually got to trial.

Bradley, a conservative Republican and attorney from Fleming Island, doesn't see it that way. He's on a mission to correct what he views as the Florida Supreme Court's "misinterpretation" of law when it comes to who has the responsibility in a pretrial hearing to prove whether a defendant can claim self-defense under "stand your ground."

He revived the legislation by filing a bill (SB 128) for the 2017 session on Thursday.

Florida's controversial "stand your ground" law, adopted in 2005, allows residents to use deadly force in defense of their lives or property in certain instances -- but with no obligation to flee.

In July 2015, five of seven Supreme Court justices ruled defendants who claim a stand-your-ground defense have to prove before trial why they’re entitled to that immunity.

Bradley and some other conservative lawmakers complained that the court "overreached" its powers, and they argued the law was intended so that prosecutors -- not defendants -- should bear the burden of proof at the pre-trial hearing. That means, under Bradley's proposed change, prosecutors would have to prove before trial why a defendant could not claim a stand-your-ground defense.

"The government has the burden of proof in a criminal case from the beginning of a case until the end," Bradley said in a statement Thursday. "This fundamental premise is guaranteed in our Constitution and understood intuitively by all Floridians."

In the spring, opponents of the proposal argued it would "stack the deck against justice for the dead."

Bradley's bill easily passed the Senate, but that was mostly a symbolic vote because the House bill abruptly died in committee before session even began.

One of the points of debate in the Senate was over what level of proof prosecutors would be held to at the pre-trial hearing: "beyond a reasonable doubt" or the lesser standard of "by clear and convincing evidence."

The version that passed the Senate included the compromise of "clear and convincing evidence." But Bradley's filed bill for 2017 calls for what he originally proposed: requiring prosecutors to prove "beyond a reasonable doubt" -- the standard required at trial -- why a stand-your-ground defense can't be claimed.

"We have an obligation to zealously guard the protections granted us all in the Constitution," Bradley said Thursday. "It was uplifting last session to have the support of fellow conservatives around the state on this important issue."

No House companion has yet been filed for 2017. Last session's sponsor, Ocala Republican Dennis Baxley, is now in the Senate.