« Justice Perry on lingering racism in Florida and the justice system: lynching and the death penalty | Main | Report: Women in Florida are poorer, have less health care and make up a growing racial divide compared to other states » 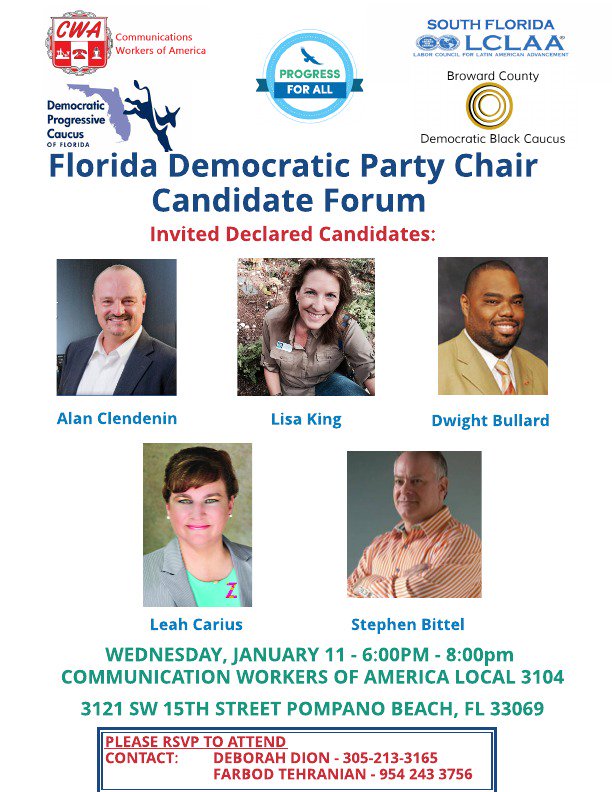 The drama of the race to lead the Florida Democratic Party will travel to left-leaning Broward when the candidates convene at a forum in Pompano Beach Jan. 11.

Wealthy donor/developer Stephen Bittel, activist Alan Clendenin, former state Sen. Dwight Bullard, Duval County's Lisa King and Osceola Democratic chair Leah Carius have all confirmed they will attend, said Tim Canova, one of the organizers. The forum gives Democratic activists in Broward -- the county with the highest number of registered Democrats -- a chance to hear how the candidates hope to reinvigorate the party after its crushing defeat in November with an eye toward 2018 races for Senate and governor.

But ultimately, the opinion of only two Democrats in Broward matter -- state committeeman Ken Evans and committeewoman Grace Carrington -- who get a powerful vote in the chair election in Orlando Jan. 14th.

Evans said he hasn't decided who he will vote for but said he will base his decision on who Broward Democrats coalesce around. Carrington said in a text to the Miami Herald "I'm not making my decision until 10 minutes before the vote."

Votes are weighted based on the number of registered Democrats in each county which means that Broward and Miami-Dade get a major say in the chair election to replace Allison Tant.

Chair candidates have been racing around the state meeting with Democratic leaders who get a vote and other activists who will try to sway the vote.

One of the key organizers of the Pompano forum is Progress for All, a group headed by former Congressional candidate Canova who lost the Democratic primary to U.S. Rep. Debbie Wasserman Schultz. Canova said he hasn't backed any candidate so far.

The race for Florida Democratic Party chair has been full of drama. Weeks ago, it appeared that Bittel, a wealthy donor and Coconut Grove developer, was the frontrunner when other key candidates failed to become eligible in their own counties. In Miami-Dade, Bret Berlin won a state committeeman seat and then quickly resigned to make way for Bittel to run for the post, a prerequisite to running statewide. Bittel beat Bullard 250-161.

It appeared that Bullard had given up -- he didn't show up for his own election because he was on a family cruise. But then he revived his bid by moving to Gadsden County, a small rural county in northern Florida, where he won a state committeeman spot Tuesday.

Bullard was the second candidate to move to keep his candidacy alive: after Clendenin lost in Hillsborough County, he moved into a rented trailer in Bradford County and won a similar post there.