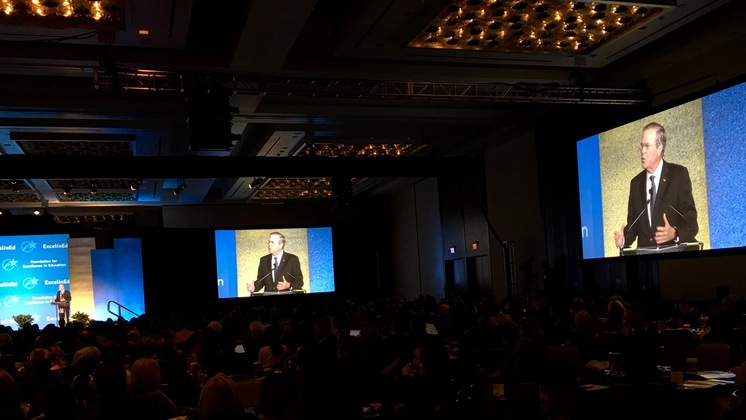 WASHINGTON -- The last time Jeb Bush held an education summit in Washington, as he does today, scores of reporters and a big crowd showed up. The headline: Bush seeks balance on Common Core under 2016 glare.

Two years ago, speculation raged over whether Bush would run for president. Finally, in June 2015, he jumped in with a big splash of money. The rest is well-known.

Today, Bush continued his re-emergence in a space he feels most comfortable in: policy wonk. He kicked off his Foundation For Excellence in Education summit with an 8:45 a.m. speech.

"This is a time for big thinking and courageous leadership, to encourage each other to move the needle so that more and more children gain the power or knowledge in this turbulent world, this exciting world that we’re living in," Bush said.

National political reporters, who used to show up en masse to hear the presumed presidential front-runner, blew off the speech.

Bush began with a nod to the election. "I actually planned not to be here this year," Bush said to laughter. "I hoped to be pursuing a different type of public service."

Turning more introspective he said, "It's always a good learning experience to get beat bad ... It is humbling and that's not bad."

The 2016 election wasn’t all bad for Bush. President-elect Donald Trump picked Betsy DeVos, an ExcelinEd board member, for his education chief.

"President-elect Trump made an extraordinary choice," Bush said Thursday to applause from an audience of about 1,000 people at the Marriott Marquis in Washington.

Bush said the Trump administration and GOP-controlled House and Senate have an opportunity for "wholesale disruption" of the education system and that he hoped for an "earthquake."

The former governor is a longtime advocate for school choice. "We all know that education has the power to alter lives, to unleash potential and to free people from poverty," he said. "And yet, we let so many children born with the potential to succeed walk out of our nation's classrooms with that potential unmet.

"The continuing widening of the opportunity gap in America couldn't come at a worse time," he said, going on to discuss rapid technological change.