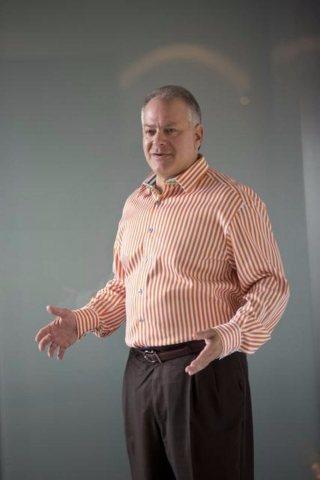 In the latest twist in the political saga over who will be the next Florida Democratic Party chief, Miami fundraiser Stephen Bittel quietly became eligible earlier this week to potentially seek the position.

Bittel was one of 131 people formally sworn in as a member of the Miami-Dade County Democratic Executive Committee late Tuesday night when the local party approved a motion to accept applications submitted during the course of the four-hour meeting. Meeting minutes list Bittel as a new DEC member in precinct 586, though he was never spotted in the room. No attendance was required.

Bittel declined to comment in any detail to the Miami Herald on Thursday.

"I hope I'll have more to say in the future," he said. "I care very deeply about the future of our community, state and country."

He wouldn't say who turned in his form. Some Democrats speculated he had funded the Pizza Hut delivery that arrived mid-meeting, after the arroz con pollo from earlier was mostly gone. ("I'm a pizzaholic," Bittel said, without confirming his involvement.)

Because Bittel's Coconut Grove precinct didn't have a captain -- most precincts are vacant -- he automatically became his precinct committeeman. (Another man from the same precinct who also became a member Tuesday hadn't signed his application, so Bittel got dibs on being named captain.)

That matters because it means Bittel is now eligible to run for a local party position next time there's an election. His allies are pushing behind the scenes for one of three Miami-Dade officers elected Tuesday to step aside precisely so that a new election is called and Bittel can run. That's the only way the wealthy developer can vie for the state party chairmanship in January.

Newly elected Miami-Dade DEC Chairman Juan Cuba -- who has said there's "zero circumstances" under which he'd step aside for Bittel to join the leadership ranks -- noted that the long list of new members also includes many former Bernie Sanders supporters and other Democrats previously uninvolved in party politics.

"We're glad to be growing the Democratic Party so quickly already," he said.

An earlier version of this post suggested new DEC members had to attend Tuesday's meeting in person to submit their applications. They did not.