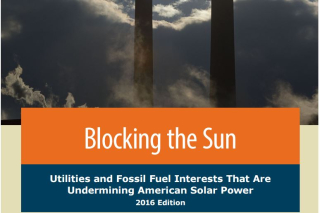 With Florida now a battleground over the future of solar energy, "utility interest groups and fossil fuel industry-funded think tanks is providing funding, model legislation and political cover for anti-solar campaigns,'' according to a new report funded by environmental activists and think tanks that are opposing the effort.

The report was written by the Frontier Group and Environment America Research and Policy Center, two environmental think tanks backed by pro-solar and anti-climate change activists. The report says it was funded by several individuals that are who are listed in the report's opening pages.

Coming after the pro-solar groups' defeat of the utility-backed Amendment 1, the missive is a sign that the battle over solar power in Florida is still young.

It also come out the same day that SolarCity, a subsidiary of Tesla Motors, Inc., announced that it has launched residential solar service in Orlando and is hiring sales staff and installers at its Clermont offices. The company said it plans to expand to additional areas of the state in the coming months.

The debate has already begun over how the issue will be framed. The utilities, with the help of a report by the conservative James Madison Institute and advocacy by the Florida Chamber of Commerce's Tallahassee leaders, have tried to make the case that as more individuals and businesses install solar panels, the cost of providing access to the grid will be divided among fewer paying customers with those left on the grid "subsidizing" others.

Their greatest worry: a “utility death spiral” triggered by customers who abandon the grid as the price of solar panels and energy storage technology declines.

In some states, "utilities have responded to the challenge posed by solar energy by working constructively with regulators and other decision-makers to develop new business models that maintain consumers’ access to an affordable, reliable electric grid,'' the report says. In others -- like Florida -- they have fought to limit customer-generated solar by attempting to pass the failed Amendment 1 and now want regulators to rollback net metering policies that encourage solar investment.

The report attempts to provide a road map for the source of much of that information by detailing the role of several organizations have had in the elaborate campaign to limit customer-owned solar expansion throughout the nation:

Environment Florida proposes several recommendations for legislators and state regulators to push back. It urges them to resist caps on net metering, added surcharges and tariffs on solar customers and to reject attempts to roll back renewable electricity standards.

Instead of focusing on the "subsidy" narrative pushed by the utility companies, it also wants regulators to calculate the value of distributed solar energy to the grid, encourage community solar projects and they want to polices that allow for "strong net metering and interconnection standards, which enable many customers to meet their own electricity needs with solar power."