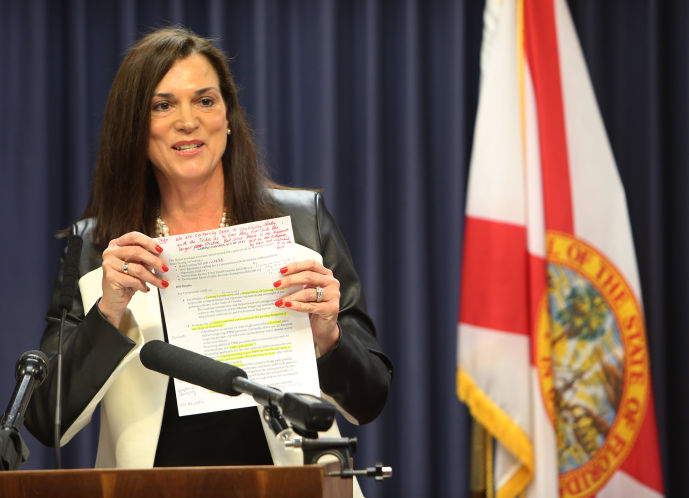 A Republican state senator who faced a competitive election in which opponents accused her of being pro-fracking has filed legislation to ban the controversial practice in Florida.

Young, who practices environmental and land use law, last year voted for a House bill to regulate and authorize the technique in Florida beginning in 2017 after a study. She told the Herald/Times the proposal this year was not so much a change of heart as an opportunity to better understand what voters want and expect in Florida.

"I'm absolutely in favor of energy independence and in favor of harnessing our natural resources safely but Florida is unique,'' she said Monday. "I believe, and it is the belief of most Floridians, that our fragile limestone geology and fragile environment as a whole is incompatible with fracking of any kind. So it's a balancing act."

During her campaign, the left-leaning advocacy Florida Strong accused Young of benefiting from the proceeds of her husband's investment firm, which has had stakes in companies that profit from the oil industry. Young dismissed the claims as distortions of her record.

Under the bill proposed last year, the state would impose a two-year moratorium on fracking while the Department of Environmental Protection would study the impact of hydraulic fracturing and similar technologies on Florida and propose rules to regulate it. The rules would have had to come back to the Legislature for ratification.

While proponents of the measure, like Young, focused on the two-year ban as the key feature of the bill, environmentalists focused on the parts that prohibited local governments from imposing their own bans or regulations, shielded from public disclosure the specific list of chemicals used in the process and ultimately opened the door to fracking.

Environmentalists cited the state’s fragile water table, the latent impact the bill could have on public health, and urged lawmakers to pass a bill proposed by Democrats to ban fracking instead. The bill didn't get a hearing in either of the Republican-led chambers.

Young, who faced Democrat Bob Buesing and no-party candidates Joe Redner and Sheldon Upthegrove during the election, said her views changed "as the fracking issue became front and center" in the campaign.
"I learned more and it became an important issue, not only for my region but for our whole state,'' she said. "I'm fulfilling my contract with the voters to get it passed."
Young acknowledged that the oil and gas industry does not support her bill but believes that her measure will get widespread support from legislators and environmentalists. A companion measure in the state House is being co-sponsored by Rep. Mike Miller, R-Orlando, who also faced a competitive election in November, and House Democratic Leader Janet Cruz of Tampa.
"It's very, very tightly drafted to not impact traditional oil and gas extraction processes,'' Young said. "Some people may want to do away with that but this legislation is not designed to adversely impact the traditional oil and gas operations in our state."
Photo credit Tampa Bay Times: Dana Young at a press conference before her election. She said opponents distorted her position on fracking in Florida.