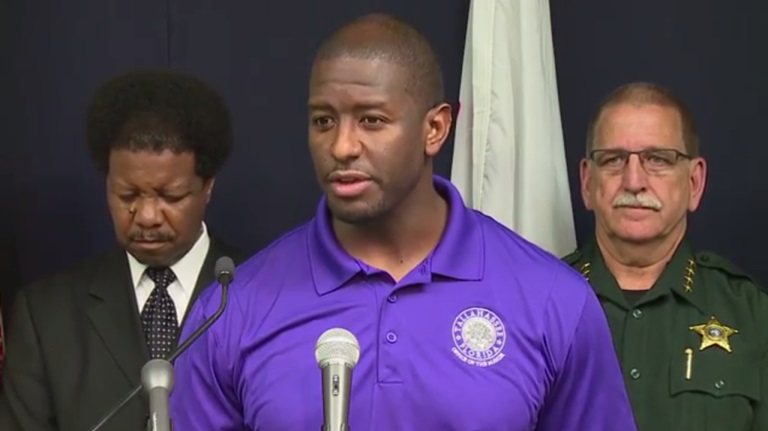 Tallahassee Mayor (and potential 2018 gubernatorial candidate) Andrew Gillum said Monday that the Pulse nightclub shooting in Orlando back in June and Friday's shooting at Fort Lauderdale-Hollywood International Airport should be wake-up calls for Florida's lawmakers.

As the Legislature prepares to vet several bills in the 2017 session that would expand gun-owners' rights, Gillum is calling for a moratorium on "all gun deregulation bills until we find a solution to protect our communities."

RELATED: "Bloodbath shows why guns should be allowed in airports, lawmakers say"

"In light of back-to-back mass shootings in less than a year and the daily pain that gun violence inflicts on our cities, it is clear that attempts to weaken our gun safety laws have failed to keep Floridians safe," Gillum said in a statement provided to the Herald/Times. "No mother or grandmother should fear walking into an airport. No father, son, or daughter should lose their life for meeting those they love for a night out. No parent should lose sleep wondering if a stray bullet will take their baby that day."

"It is time to bring commonsense back to the Capitol by ending the attack on gun safety and passing reform measures that protect our families from harm," Gillum added. "Our prayers for the victims and their families should be matched by our vigorous actions to keep families safe from repeated incidents of gun violence."

Florida's Republican-led Legislature is unlikely to heed the call from Gillum and other gun-control advocates. Many members of legislative leadership are strident supporters of Second Amendment rights.

In the wake of Friday's shooting in Fort Lauderdale, two conservative Republican lawmakers -- Sen. Greg Steube, R-Sarasota, and Rep. Jake Raburn, R-Lithia -- who had previously been proposing to lift the ban on concealed weapons in airport terminals doubled down on their proposal.

While their bills would not have prevented Esteban Santiago from killing five people and wounding six others, they argue that allowing Florida's 1.7 million concealed weapons permit-holders to carry in airport terminals could have, perhaps, given bystanders a chance to defend themselves.

RELATED: "Airport shooter had mental health problems but no apparent ties to terrorism"

Legislative committees begin meeting this week to start vetting bills filed for the upcoming 2017 session, which begins in March. Gun legislation is not scheduled to be heard this week.

Gillum's name is among a handful of Democrats who are said to be considering a run for governor next year. He's been outspoken lately against the gun lobby, including the NRA. The First District Court of Appeals is hearing oral arguments on Tuesday in a lawsuit filed by gun rights groups, who sued Gillum and other Tallahassee officials after they failed in 2014 to repeal a ban on guns in a city park.