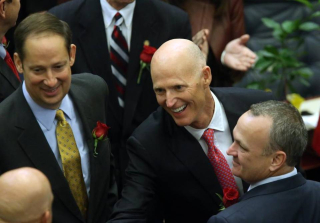 Before President Donald Trump issued an executive order blocking refugee resettlement in the U.S., the Florida House already had its sights on the program.

Last Friday, before Trump issued an executive order temporarily blocking refugee resettlements, House Speaker Richard Corcoran, R-Land O'Lakes, wrote a letter to the president calling refugee resettlement a "one-sided partnership that is particularly concerning." He further called for the federal government to provide the state with more detailed information about the refugees being sent to Florida.

"We find the present arrangement for this program unacceptable and an abrogation of our duty to protect the safety of Florida residents," Corcoran wrote. "Consequently, the Florida House of Representatives is seriously re-evaluating Florida's role in these programs."

Refugees are vetted by the United Nations and federal law enforcement before being assigned a state for resettlement. Corcoran's complaint, which echoes concerns raised by Gov. Rick Scott since late 2015, is that state officials are not given full background information that went into that vetting.

It follows a belief held by the Trump administration that refugees are insufficiently investigated before arriving in the country and pose a risk to public safety, though the Florida Department of Law Enforcement told a House panel last week that there have been no acts of terrorism committed by refugees in this state.

Scott in 2015 opposed efforts by then-President Barack Obama's administration to resettle additional Syrians in the country and demanded the federal government release more information about the refugees it had sent to Florida already, a request that was denied.

"This is what the governor had been saying all last year with the Syrian refugees and so obviously the governor firmly believes that this information should be shared with state law enforcement so we can protect citizens in our state," Scott spokeswoman Jackie Schutz said Monday.