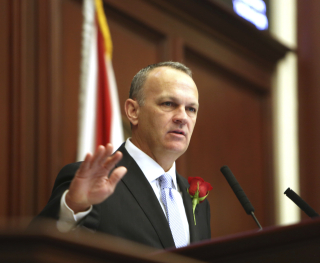 Labarga's action came in response to a decision by Perry that "he had decided to pursue other things" instead of serving to fill in vacancies on the court until September 2018, as the original order had allowed, said Craig Waters, spokesperson for the Florida Supreme Court.

The ruling got attention Monday because House Speaker Richard Corcoran threatened to file a petition before Labarga's court, challenging the chief justice's action as in violation of the Florida Constitution.

Labarga said in his order that the court "has a long tradition of assigning recently retired Justices to senior service for purposes of completing the work they already had begun on this Court before the dates of their retirement."

He said the practice was intended to promote "judicial speed and economy" by "ensuring that justices who already have worked on those cases are available to continue to participate in them whenever necessary."

The Constitution gives the chief justice the authority to assign a retired justice to temporarily fill a vacancy on the court but, Corcoran argued, that in effect made Perry an "eighth justice" on the Supreme Court.  Download DRAFT 2017.xx.xx_Petition for quo warranto

Corcoran argues that after Gov. Rick Scott appointed Justice Alan Lawson as Perry's successor, the court could decide whether to rehear the cases that the court hadn't completed before Perry's retirement or allow Lawson to receive the briefs and then vote on the case.

The practice of having retired justices finish opinions that were in the pipeline before they retied has been employed by the court for the last 30 years, Waters said, and has never before been challenged as unconstitutional. Among the justices who have stayed on to complete orders of their unfinished work in recent years were both conservative a liberal judges including Justices Leander Shaw, Ben Overton, Raoul Cantero.

Perry was an outspoken opponent of the death penalty in light of the U.S. Supreme Court's decision a year ago in Hurst v. Florida and Corcoran has objected to many of the court's rulings in recent years in which he was in the majority.

The draft emergency petition drafted by the House's lawyers had Corcoran, acting "as a taxpayer." It challenged Labarga's legal authority as well as what the House concluded were unauthorized payments of taxpayer money to Perry.

The court has, however, has not paid Perry anything, said Paul Flemming, spokesperson for the Florida Courts Administrator. As a retiree of state government, Perry would have forfeited his pension if he had he accepted any compensation from the state for the first year of his retirement, Flemming said.

"There is no constitutional or legal justification for the Chief Justice's assignment of retired Justice Perry to the status of 'senior justice' or to assign him as a justice sitting on active cases before this court after retired Justice Perry resigned his commission," Corcoran's draft lawsuit reads.

Labarga's order marks the second time in a week in which Corcoran's planned action against the judiciary was short-circuited. A week ago, Duval Circuit Judge Mark Hulsey III abruptly resigned, one day before a House committee was to have launched impeachment proceedings against him for allegedly making racist and sexist remarks from the bench.