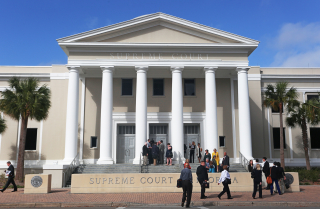 Lancelot Uriley Armstrong was convicted of killing John Greeney, a Broward County sheriff's deputy and Air Force veteran, during a 1990 armed robbery at a Church's Fried Chicken in Fort Lauderdale. The jury voted 9-3 to sentence him to death and gave another man involved in the armed robbery a life sentence.

Now, Armstrong, as well as Donald Otis Williams, convicted of kidnapping and murdering an 81-year-old woman in 2010, and William M. Kopsho, sentenced for killing his wife in 2000 after learning she was having an affair, will have new sentencing hearings.

It's possible they could still be sentenced to death, but they could also see their sentences commuted to life in prison.

Courts will empanel new juries to decide how to sentence each of these men, though they will not determine whether they are guilty, as their first-degree murder convictions have not been overturned.

If the Florida Legislature updates the state's death penalty laws to require a unanimous vote for a death sentence -- as state Sen. Randolph Bracy, D-Orlando, has proposed (SB 280) -- then a vote of all 12 jurors could put them to death. Anything less would lead to a life sentence. (The state Supreme Court threw out Florida's death penalty laws as unconstitutional last year because they did not require unanimous jury votes.)

By demanding new sentencing hearings in these cases, the court is putting into practice a Dec. 22 ruling that could lead to life sentences for some of the 200-plus death-row prisoners whose cases were finalized after a key U.S. Supreme Court ruling in 2002.

It's likely similar decisions will continue to trickle out of the court in the coming months.

In the December rulings, the justices decided that death sentences finalized after June 2002 were unconstitutional because they did not require a unanimous jury vote and because the judge could impose a death sentence without the jury's approval. It's a standard critics, including Senior Justice James Perry, have criticized as "arbitrary."

Older sentences still stand. The court affirmed two of them Thursday, as well, including the case of Stanley McCloud, convicted of killing his wife with a .357 magnum in front of their two young children.