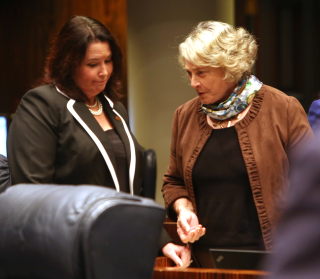 If federal judge Robert Hinkle plans to side with the state of Florida in an abortion lawsuit, he showed no signs of it in his courtroom Friday.

For nearly an hour, Hinkle asked hard questions and picked apart the state's defense in a case that aims to throw out provisions of an abortion law passed by the Legislature last year. At times, he looked incredulous, even frustrated with the state's lawyer, Blaine Winship.

It's the latest high-profile case that brought the state's lawyers into Hinkle's courtroom -- where he's frequently ruled against them. Last summer, he threw out provisions from the same abortion law now being challenged by the American Civil Liberties Union of Florida.

The law, signed last March by Gov. Rick Scott, in part requires anyone who "provides advice or help to persons in obtaining abortions" register with AHCA, thus making their work known and, according to Hinkle and the ACLU, opening a path for prosecution of a decades-old law that requires they give a "full and detailed explanation of abortion" and its alternatives.

Fulwider says being forced to register with the state voilates his First Amendment right, in part because it costs $200 to register every other year. The law "attempts to encroach into pastoral counseling," he said, calling the state "Big Brother."

"What they have to do right now is pay some money in order to speak," Hinkle said.

The state disagrees. AHCA has interpreted that the law to only applies to organizations who receive donations specifically earmarked for abortion counseling and that the registration fee doesn't constitute a restriction on speech.

It's not clear when Hinkle will rule -- or how -- but his comments on the bench gave some indication.

While the state's arguments insisted the law was not about targeting abortion-related organizations, Winship differentiated from other procedures saying that "there's not another life involved" in them.