Florida woman at D.C. anti-Trump march: 'I feel like my innocence was taken away' on Election Day 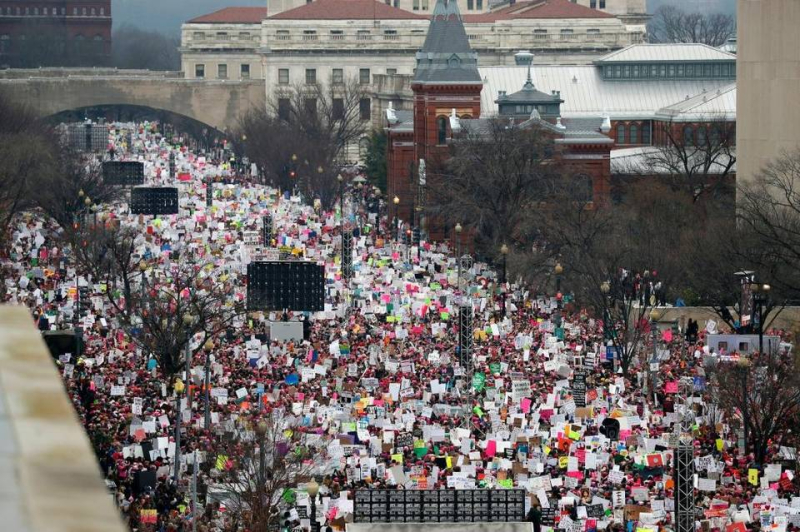 WASHINGTON -- In what they proclaimed to be an act of rekindled political resistance, hundreds of thousands of women — and men, and children, but mostly women — took over the pulsating streets of the nation’s capital Saturday to protest Donald Trump less than 24 hours after he assumed the presidency.

The demonstrators overwhelmed downtown Washington from just after dawn into the evening, in a show of force against a chief executive they see as threatening to the liberal views espoused by a popular majority that nevertheless lost the electoral vote. Massive marches to oppose Trump also took place in Miami, New York City, Chicago, Boston and other big U.S. cities, and other global capitals, including London, Paris, Sydney, Ottawa and Nairobi.

“I feel like my innocence was taken away the day he was elected. I had blinders on,” said Tracy Sassi, a 49-year-old from Fort Lauderdale who flew into Washington with her 15-year-old stepdaughter, Sofia Vera, who said the day had “kind of restored my faith in humanity.”

So many more protesters spilled into Washington — an estimated half-million, about double what had been expected — that organizers scrapped their original route from a rally at the U.S. Capitol to the White House. For a brief, confusing period, it appeared no march would take place because the throngs were so big and unwieldy. But the crush of people moved as if with a mind of its own, walking down off-route streets even before the Capitol rally concluded.

“This is the upside of the downside,” feminist icon Gloria Steinem, 82, said from stage early on in the rally. “This is an outpouring of democracy like I’ve never seen in my very long life.”

The same streets that a day earlier had seen delighted Trump supporters make their way to the National Mall were now crammed by his most fervent opponents — a two-day display, if ever there was one, of the messy passions of democracy.