It began on a Saturday afternoon in 1967 at a delicatessen in Miami Beach. At Wolfie's, legend has it.

Three South Florida lawyers -- Mel Greenberg, Larry Hoffman and Bob Traurig -- met and formed the law and lobbying firm known today as Greenberg Traurig, which claims to have about 2,000 lawyers in 38 cities in the U.S., Europe and the Middle East.

To mark the firm's first 50 years, Greenberg invited a few hundred friends to the Governor's Club for a reception Thursday night. The event also noted that GT first established a foothold in Tallahassee 25 years ago by joining forces with the 14-member law firm of Roberts, Baggett, LaFace & Richard. 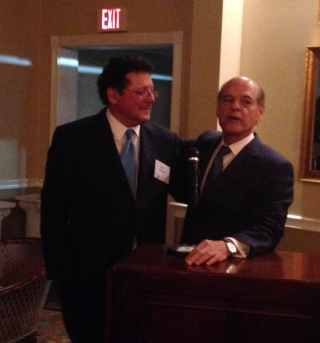 "Tallahassee was our first foreign acquisition," joked the firm's senior chairman, Cesar Alvarez, in a celebratory moment with lawyer-lobbyist Fred Baggett, who runs the Tallahassee office (Baggett and Alvarez are at left).

Their clients include the Seminole Tribe of Florida, Florida Hospital Association and the statewide association of court clerks, several of whom were at the party, including Ken Burke of Pinellas, Karen Rushing of Sarasota and Carolyn Timmann of Martin. The elected clerks tangle every year with the Legislature over court fines, fees and other revenues needed to pay for their day-to-day operations.

Gov. Rick Scott stopped by to say a few words and naturally talked about those 2,000 jobs. "You probably knew what I ran on in 2010. I ran on jobs," Scott said to laughter. "I think, what, you have 2,000 lawyers now? Congratulations on all the jobs. I love jobs."