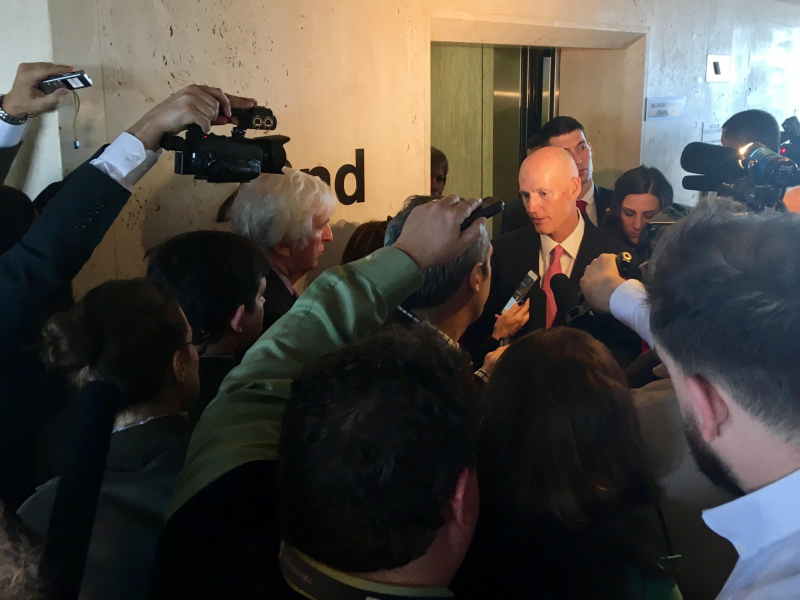 To better recruit and retain quality teachers for Florida's K-12 public schools, Gov. Rick Scott wants the state to spend $58 million in the next budget year on a handful of initiatives -- and those don't include a controversial teacher bonus plan that lawmakers, with Scott's support, have advanced in recent years.

"Teachers are key to preparing our future generations for great careers," Scott said Tuesday when rolling out priorities of his 2017-18 budget proposal during a news conference in Tallahassee. "We have to make investments to recruit and retain the best educators in our classrooms."

-- $15 million to eliminate initial and renewal certification fees for teachers;

-- $10 million for "a one-time hiring bonus for teachers testing in the top 10 percent of the Subject Area Examination in the subject they are teaching in the 2017-2018 school year";

-- $5 million to "increase the diversity of teachers in critical shortage and high-need areas";

-- $5.9 million to "recruit Bright Futures scholars that major in education and commit to 4 years of teaching following graduation in the rural districts from which they graduate high school";

-- $16 million for school districts to "implement targeted recruitment and retention initiatives that meet the district’s need";

-- And, $6 million to "reward great teachers in low-performing schools."

Lawmakers will need to decide whether to include Scott's recommendations when they formally craft and vote on next year's budget in the upcoming legislative session, which begins in March.

How best to recruit and retain teachers has been the subject of much debate for lawmakers in recent years. At the center of that has been the controversial "Best and Brightest" teacher bonuses, which reward "highly effective" teachers based on their high school ACT/SAT scores.

The bonuses -- the brainchild of and a priority of the Florida House for the past few years -- have come under severe scrutiny, because there's no proven correlation between high school test scores and one's ability to be an effective teacher.

Lawmakers this year, particularly in the Senate, are exploring alternative ways to reward promising teachers, which could lead to the end of "Best and Brightest."

The Republican-led Legislature last spring approved $49 million in spending on "Best and Brightest" to continue it this year, despite reluctance from some lawmakers even then. In the fall, the State Board of Education called for ending the controversial bonus program.

Scott's budget plan last year endorsed renewing funding for "Best and Brightest," but the program is noticeably absent from his proposed initiatives for 2017-18. He said Tuesday he crafted his recommendations after talking with teachers.

"When we sat down with the teachers of the year, they talked about the significant fees they have to pay, so I have the $15 million there," Scott said. "It’s all tied to when we talked to teachers specifically and what do they believe would help recruit and retain the best teachers."

In total funding, including state and local dollars, Scott's budget would increase public K-12 education spending by 4 percent -- or $815 million -- from about $20.2 billion this year to nearly $21 billion in 2017-18. Most of that increase would come from local property tax dollars, which would account for nearly $558 million of the extra dollars.

Scott insisted that the additional money required from local property taxes don't amount to a tax increase, because -- although homeowners will pay more on their tax bill because of higher property values -- the tax rate isn't changing.