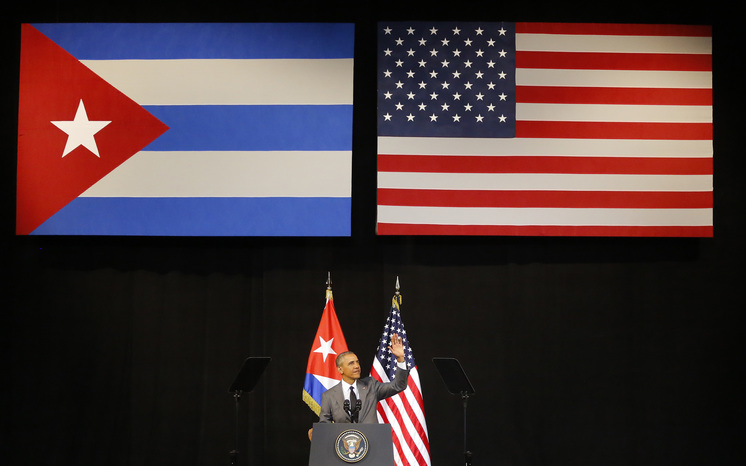 President Barack Obama undid 20 years of U.S. immigration policy toward Cuba on Thursday, repealing the "wet foot, dry foot" position that allowed Cubans who reached U.S. soil to remain in the country without fear of deportation.

Reaction from Florida politicians, including Cuban-American hardline members of Congress, was swift.

The ‘wet foot, dry foot’ policy was put in place many years ago to help those who were fleeing Castro’s repressive regime. I believe changing this outdated policy in order to be fair to all and also to prevent people from abusing the system is the right thing to do.

While I have acknowledged the need to reform the Cuban Adjustment Act for some time now, the Obama Administration’s characterization of this change as part of the ongoing normalization with the Castro regime is absurd. It is in fact President Obama's failed Cuba policy, combined with the Castro regime’s increased repression, that has led to a rise in Cuban migration since 2014.

The Cuban Adjustment Act has provided countless Cubans the opportunity to escape the Castro tyranny. However, in recent years it has also led to growing abuses. While some changes were needed, we must work to ensure that Cubans who arrive here to escape political persecution are not summarily returned to the regime, and they are given a fair opportunity to apply for and receive political asylum.

Furthermore, I am concerned by the decision to terminate the Cuban Medical Professional Parole Program. For decades, the Castro regime has forced thousands of doctors to go abroad as a tool of its foreign policy. This is political repression, and I am optimistic that the incoming Trump Administration will reverse this part of the executive order and allow these doctors to seek asylum at U.S. embassies or consulates in other countries.

I had the opportunity to discuss this issue with Vice President-elect Pence this evening, and I am heartened by the fact that in a week we will have a new administration committed to discarding the failed Cuba policy of the last two years.”

President Obama's policy legitimizing the Castro dictatorship created a great deal of anxiety and uncertainty in Cuba and resulted in a mass exodus from the island. Since the President announced his deal with Castro at the end of 2014, almost 100,000 Cubans have reached our shores. Many others fled the island but never arrived, instead dying at sea or in the jungles of Central America.

For two years, I have demanded a solution to this crisis from the Administration. Instead, the Administration chose to wait until the last hour to act, and as usual collaborated directly with the Cuban dictatorship instead of consulting members of Congress. America’s policy toward Cuba should serve to advance U.S. interests, and it should never be coordinated with anti-American dictators.

Although our country's immigration policy toward Cuba has granted many of the dictatorship's victims refuge, it has also been grossly abused and exploited by many Cuban nationals, while also inadvertently bolstering the Cuban regime. A change to this policy was inevitable. I remain firmly committed to supporting the victims of persecution in Cuba while ending all abuses of America’s generosity.

With regards to the cancellation of the Cuban Medical Professional Parole Program, which offered refuge to Cuban doctors who are in effect slaves of the regime assigned to countries around world, it is regrettable and a clear example of the Cuban regimes influence over the Obama Administration. I hope the incoming Administration will consider reinstating this program.

U.S. Rep. Mario Diaz-Balart, R-Miami (in a statement titled, "Have You No Shame, President Obama?"):

With just eight days left in his administration, President Obama has found one more way to frustrate the democratic aspirations of the Cuban people and provide yet another shameful concession to the Castro regime.  Under President Obama's misguided view, after having removed the Castro regime from the state sponsor of terror list and granting diplomatic recognition, the next logical step is denying oppressed Cubans the presumption of political asylum.

Since 1966, the Cuban Refugee Adjustment Act has provided a lifeline to generations of Cubans fleeing oppression.  Many made the treacherous journey to begin their lives anew in freedom, and others perished trying to escape.  In addition, the Cuban Medical Professional Parole Program provided a way for doctors forced to work under inhumane conditions for paltry salaries in foreign lands to escape their servitude.

President Obama's policy toward the Castro regime has not improved human rights or increased liberty on the island.  To the contrary, documented political arrests reached close to 10,000 in 2016 as renowned activists such as Berta Soler, Danilo Maldonado Machado "El Sexto," and labor activists including Ivan Carrillo Hernandez suffered brutal arrests just in the past few weeks.  El Sexto remains in prison today and his American lawyer, Kim Motley, was harassed and interrogated while in Cuba simply for representing him.  Cubans are leaving the island in record numbers, and many of the 53 who were released as part of the Obama-Castro deal were subsequently rearrested.

President Obama's numerous concessions and extension of diplomatic recognition to the murderous Castro regime does not constitute an achievement.  To the contrary, his policy has been a succession of betrayals of America's longstanding commitment to human rights and freedom, and a betrayal of the Cuban people who have suffered under oppression for far too long.  This last act of diminishing lifelines to Cubans languishing in totalitarianism is one final despicable betrayal of a people who deserve better from an American president.

Castro uses refugees as pawns to get more concessions from Washington so there is no reason to do away with the Cuban medical doctor program, which is a foolhardy concession to a regime that sends its doctors to foreign nations in a modern-day indentured servitude. The repeal of the Cuban Medical Professional Parole Program was done because that's what the Cuban dictatorship wanted and the White House caved to what Castro wants, instead of standing up for U.S. democratic values and seeking the return of fugitives from U.S. justice like Joanne Chesimard or seeking compensation for U.S. citizens for their confiscated properties. In another bad deal by the Obama administration, it has traded wet foot/dry foot for the elimination of an important program which was undermining the Castro regime by providing an outlet for Cuban doctors to seek freedom from forced labor which only benefits an oppressive regime.

The end of the “wet foot/dry foot” policy should be followed by congressional action to lift the outdated economic embargo and improve economic conditions for everyday Cubans.  This is an important step in normalizing our relationship and America must do everything to lift small business entrepreneurs and create opportunities on both sides of the Florida Straits.  We must continue to leave the Cold War policies behind and build new bridges for jobs and economic opportunities for both nations.

I have witnessed how the “wet foot, dry foot” policy created an uneven playing field for immigrants from other Caribbean nations who are also seeking the opportunity to pursue the American dream.    I have also seen Cubans who try to come here for short term visits to see family members negatively affected by “wet foot/dry foot.”  The change in policy today will help ensure that we can have safer and more orderly migration with all of our Caribbean neighbors.