« German golfer who lives in Boca explains how voting anecdote made it to Trump | Main | 2017 is chance 'for us to really blow open school choice opportunities,' GOP lawmakers say » 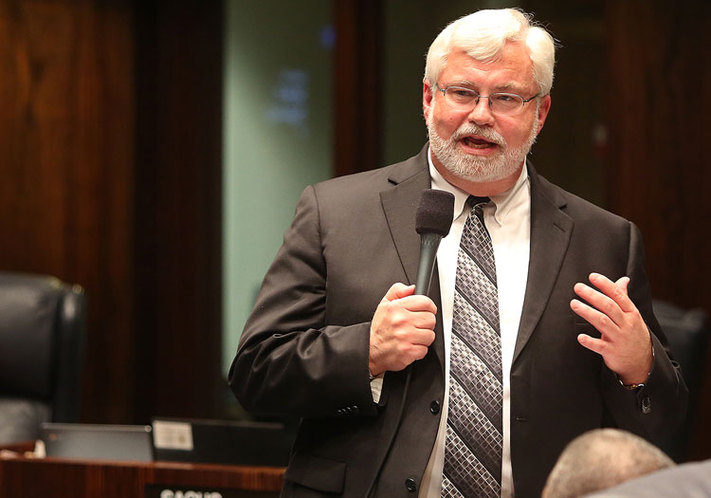 Add the chairman of the Florida Senate's budget writing committee to the list of those not quite ready to jump on board Gov. Rick Scott's plan to hand out $618 million in tax cuts primarily to businesses next year.

Senate Appropriations chairman Jack Latvala, R-Clearwater, didn't give a flat no to the Republican governor's tax plan. But when asked about it on Thursday, Latvala took a wait-and see approach and listed out other important areas of state government that need to be addressed.

"We're 50th in mental health funding," Latvala said. "We're 49th in infrastructure. We have a lot of challenges with our prisons. And our state employees haven't had a raise in 9 years."

Latvala said the specifics of Scott's plan will take a review by the Legislature. But lawmakers are already facing a tighter budget situation this year than last year when they cut taxes by $129 million.

"We’re just going to wait and see," Latvala said. "I support the governor's efforts to lower taxes. I think he's done a wonderful job on that. I've been here and voted for everyone of them."

Latvala's voice is important because Scott can propose a budget and ask the Legislature for funding, but it is up to the House and Senate to craft a state budget. Latvala's committee is the primary budget writing committee in the Senate.

Scott on Thursday continued to fly around the state to promote his tax cut plan. The centerpiece of Scott's plan is a $454 million cut in the state's sales taxes charged to businesses that lease commercial space. Florida is the only state in the country with the 6 percent tax. Scott wants to roll that back to 4.5 percent. Doing so, he said, will put more hands in the pocket of private businesses, which will then hire more people.

- A 10-day back-to-school shopping period with no sales taxes.

- Eliminating sales taxes on college textbooks for one year.