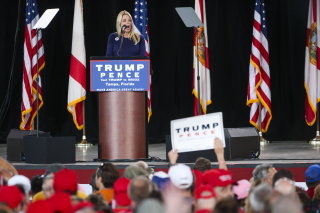 In an intervew on Fox Business, Bondi said she "firmly believes" in Trump's order, which temporarily banned nationals of seven Islamic countries from entering the United States and blocked refugee resettlements. A judge halted parts of it late Saturday, and the order led to weekend-long protests at airports around the country.

"We all knew this was coming," Bondi said. "And we have to remember this isn't a ban on religion. We all agree -- all attorneys general -- we agree on religious liberty in our country and in our world. This is about radical terrorists."

Attorneys general in 16 states, all Democrats, came out against the executive order Monday.

Under former President Barack Obama, Bondi was a frequent critic of federal immigration policy and sued the administration over an executive order deferring deportation of 5 million immigrants.