« Court overturns three death sentences, including cop killer's | Main | Time is running out to apply to the Constitutional Revision Commission » 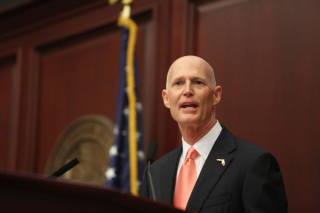 “I’ve spent quite a bit of time already with Congressman Price, who I’ve known for a long time, to try to come up with a plan to repeal what doesn’t work and to replace it with something that’s going to drive down costs and improve access,” Scott told reporters, according to the report.

He did not provide specifics.

Scott --who ran the hospital company Columbia/HCA before becoming governor -- has been a vocal critic of the Affordable Care Act, also known as Obamacare. Scott was at Columbia/HCA during what was then the largest Medicare fraud case in U.S. history. The case was settled after he left the company, though Scott wanted to fight the accusations.

In 2015, he sued the federal government, saying the Obama administration was wrongly trying to coerce the state into expanding Medicaid. Scott fought hard against legislation expanding health care coverage to low-income Floridians that year.

This post has been updated to clarify details about the Columbia/HCA Medicare fraud case.